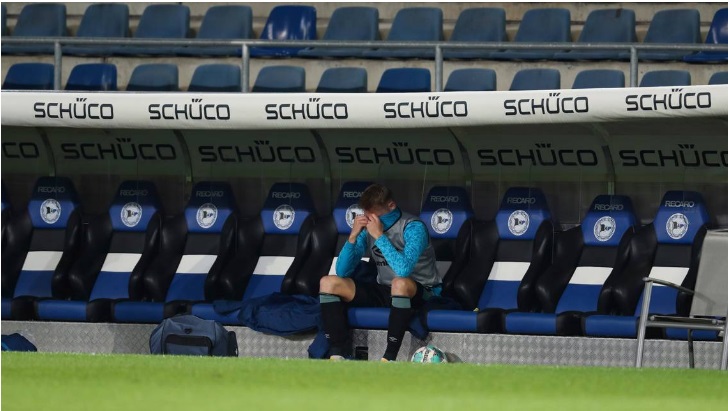 BERLIN -Schalke 04 players and staff were attacked with eggs and were threatened by their own fans Wednesday after a 1-0 defeat by Arminia Bielefeld sealed their relegation from the Bundesliga for the first time in 33 years.

Schalke’s 21st league defeat of the season on Tuesday ensured the ‘Royal Blues’ have no hope of escaping the drop in their final four games of the season.

Upon their return to the Schalke stadium early on Wednesday they were met by about 500 to 600 fans and were scheduled to briefly discuss the situation with them.

“Within the framework of this meeting there were some still unidentified individuals who clearly stepped over lines that are non-negotiable for Schalke,” the club said in a statement.

Gelsenkirchen police said fans had already started lighting fireworks and flares around the stadium immediately after the end of the game.

“Once the team arrived and stepped off the bus there were severe protests,” police said in a statement. “Eggs were thrown at the players who were also verbally attacked.”

It said a strong police presence on site was mobilized to avoid any escalation.

Schalke are among the most fiercely supported clubs in Germany and typically draw more than 60,000 fans to home games.

“While there is understandable frustration and anger for the relegation, the club will never accept it when the physical integrity of its players and staff is put in danger,” Schalke said. “The club sharply condemns this behavior and naturally supports its staff.”

Having gone through five coaches in the current campaign, Schalke, Bundesliga runners-up as recently as 2018, have conceded 76 goals, more than any other team in an entire season since 2000.

This is Schalke’s fourth relegation overall and the first since 1988. The club has won the German title seven times, the last of which came in 1958, but have yet to be crowned champions since the introduction of the Bundesliga in 1963.