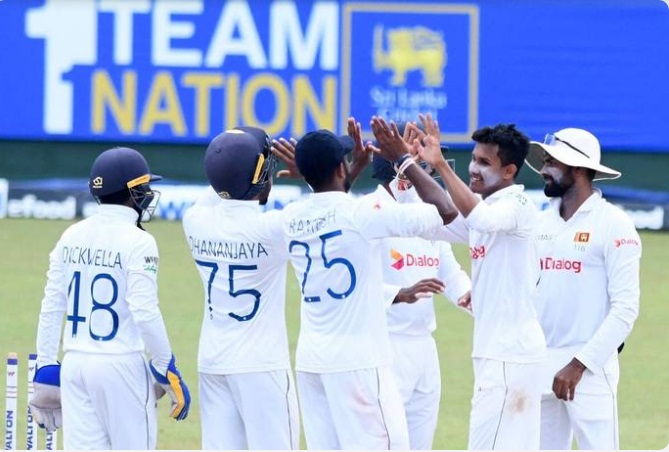 Praveen Jayawickrama entered the record books as Sri Lanka’s inexperienced spin attack carried them to a 209-run win against Bangladesh in the second Test in Pallekele. Sri Lanka also won the series 1-0. Jayawickrama’s match figures of 11 for 178 was the best by a Sri Lankan bowler on debut, the best by a left-arm spinner on debut, and the first bowler to take a 10-wicket haul on debut since Jason Krejza in 2008.

Mehidy Hasan Miraz, who kept Sri Lanka in the field for an hour on the fifth morning, was Jayawickrama’s tenth wicket. After making 39, Miraz had telegraphed his lap sweep far too soon, as Pathum Nissanka anticipated the shot, moved to his right, and took the catch. Jayawickrama wrapped up the game with Abu Jayed’s wicket, his fifth lbw in the game.

The visitors added 50 runs to their overnight score of 177 for 5 but a long tail made sure all the onus was on the Liton Das-Miraz partnership for any chance of survival. But that lasted just 14 balls in the morning when Liton was lbw to Jayawickrama, missing a subtle straighter delivery. Jayawickrama’s left-arm stock deliveries had earlier sucked Liton into thrusting his pad down the line. Taijul Islam offered his usual resistance but Taskin Ahmed, Shoriful Islam, and Jayed didn’t.

Bangladesh was set a target of 437 runs with roughly 150 overs left to play. Tamim Iqbal was the first to go, undone by Ramesh Mendis’ beautifully dipping off-break that took his outside edge. Tamim’s streak of four fifties was broken as he was dismissed for 24.

Saif Hassan and Najmul Hossain Shanto then stuck around for 56 balls, in which both batters went after the Sri Lankan spinners. Hassan cleared his front leg on several occasions to hit straight, but the approach cost him when he holed out at the cover point, giving Jayawickrama his first wicket. Shanto too fell to the left-arm spinner, missing a delivery that spun through his bat and pad.

Mominul Haque fell to Mendis for the second time in the match, this time bowled off an inside edge after falling lbw in the first innings. It was a soft dismissal, and attempted late cut that looked lackadaisical. Mushfiqur Rahim also fell to Mendis when an offbreak reared on him, brushed his gloves, and gave short leg an easy catch. He made 40.

But much like Hassan, Shanto and Mominul, Mushfiqur too was chancy. Lahiru Thirimanne dropped him at slip before Niroshan Dickwella missed a stumping chance through his legs.