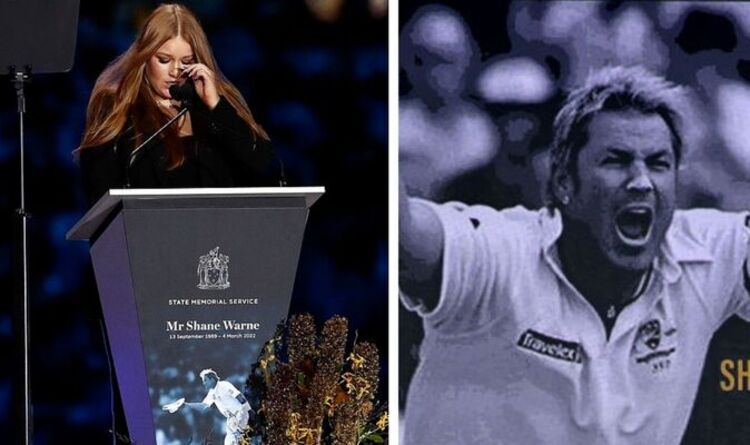 On Wednesday, Shane Warne’s youngest daughter Summer Warne was left in tears as she remembered her legendary father during a state memorial at the iconic Melbourne Cricket Ground (MCG).

Warne’s three children Brooke, Jackson, and Summer gave gut-wrenching speeches, where tens of thousands of people including Warne’s family, celebrities, and a host of players gathered to pay tributes to one of the game’s finest players.

Warne, the Australian cricketing genius whose talent and personality transcended the game died of a suspected heart attack about three weeks ago at the age of 52 while on holiday in Thailand.

A private funeral was held for Warne, which family and closest friends in Melbourne attended last week. However, the Sun reported that all were invited to Wednesday’s televised memorial, which a billion people tuned in worldwided.

The spin legend’s eldest daughter Brooke, 24, opened up about the agony that her father will never see her or her siblings achieve major life milestones such as marriage and kids.

“I could go on forever about what we’re going to miss out on, but nothing would be more upsetting about how much I already miss you Dad,” the 24-year-old said.

Her younger sister Summer broke down to tears when she led the tributes remembering her loving father. She recalled her last memories of being with her father on March 2, two days before his shock death.

“I’ve had to come to terms with the fact that you won’t be able to walk down the aisle on my special day,” Summer said.

You’re never going to meet your grandchildren that you’re going to have some day, but instead you will be someone I will tell my kids about. They would have loved and adored you just like I do,” the 20-year-old added.

Their brother Jackson also described their father as the best dad anyone could ask for and his best friend.

“Time with you went way too fast. It feels just like yesterday that we were looking at each other’s cards playing poker, eating pizza while watching the Saints,” Jackson said recalling fond memories about Warne.

Meanwhile, a host of athletes, musicians and Hollywood actors offered video tributes for the cricketer, who was a huge fan of rock music.

The two-and-a-half hour memorial ended with Warne’s three children unveiling a stand in the MCG renamed after the maverick leg spinner. The former Great Stand at the venue will now be known as the Shane Warne Stand.