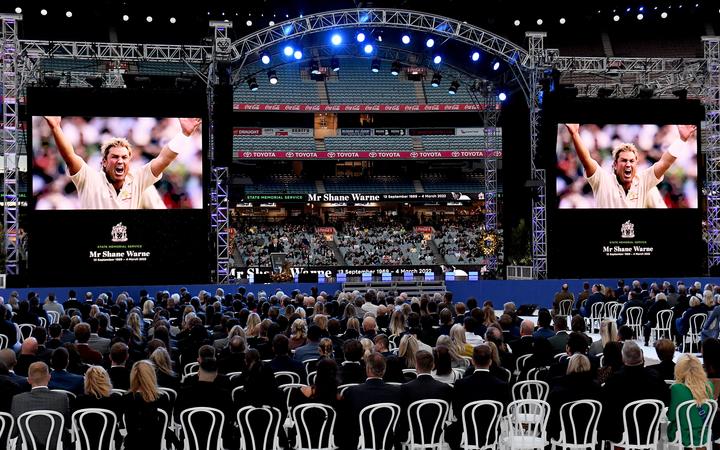 Melbourne: Shane Warne was remembered as “mesmerising” and a “genius” at a state memorial service in Melbourne Wednesday attended by tens of thousands of spectators and legendary players, with music superstars Elton John and Chris Martin performing by video link. A picture of former Indian player Sachin Tendulkar and Shane Warne is projected onto screens during a memorial service for Warne at the Melbourne Cricket Ground in Melbourne, on Wednesday. AP

The well-loved Australian cricketer died at a luxury resort in Thailand this month from a suspected heart attack, aged 52, eliciting shock and grief from his millions of fans as well as prime ministers, rock stars and fellow players.

The larger-than-life “king of spin” was honoured at a two-hour service at the Melbourne Cricket Ground with more than 50,000 free tickets handed out. It was beamed live to cricket grounds across Australia and watched around the world.

“Looking forward to a future without Shane is inconceivable,” his heartbroken father Keith said after batting great Donald Bradman’s granddaughter Greta sang the national anthem to kick off proceedings.

“But we take comfort in knowing that Shane packed more into his life of 52 years, five months and 19 days than most people would in two lifetimes.”

Warne’s son Jackson said there was “no other better place in the whole world” to hold the memorial than the famous MCG where Warne made so many memories, including a hat-trick in an Ashes Test against England and taking his 700th Test wicket.

“It’s very special for a lot of us, especially our family,” he said.

A stand at the ground was officially re-named after Warne, who in the eyes of many is second only to Bradman in Australia’s long list of sporting greats.

Some fans attending wore their cricket kit, while others donned Warne t-shirts with emotions running high as they snapped pictures in front of his statue outside the venue.

One woman showed off her new thigh tattoo of Warne, which she had done last week.

Mark Taylor, who captained him for Australia, said the huge interest showed “how admired Shane Warne was”.

“The fact he had that rough diamond character about him made him what people like to see. People like to see something a bit different, and they got that with Warnie,” Taylor told reporters.

“I don’t know how the Oxford dictionary defined genius, but he’s as close as I’ve been to genius, the way he developed his game and just transcended everything,” he said. “He’s left us with a flood of memories and such great times.”

“His cricketing ability was one thing, but his generous heart for second to none,” Finch said from Pakistan.

“It’s a sad day today but it’s not in some ways because his legacy lives on and he will live on through future generations because he was mesmerising, brilliant and loved to play cricket and loved life,” said John before singing ‘Don’t Let The Sun Go Down On Me’.

A barefoot Martin, at the piano, performed ‘Eulogy’, a piece he wrote for Warne, before a solo acoustic rendition of Coldplay’s ‘Yellow’.

Hollywood star Hugh Jackman was among others appearing remotely, as was golfer Greg Norman and surfing giant Kelly Slater.

Cricketing greats such as Brian Lara and Nasser Hussain were among an array of former players at the service.

Credited with reviving the art of leg-spin, Warne took 708 Test wickets as part of a dominant Australian team in the 1990s and 2000s before becoming a respected commentator.

Before the state service in his memory, Warne’s family, friends and teammates mourned him at a private funeral on 20 March.