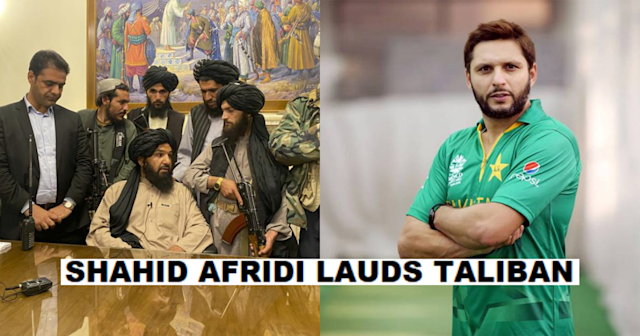 There seems to be no end to Controversial remarks being made by former Pakistan skipper Shahid Afridi. This time around he has come forward and made a remark about the terrorist outfit Taliban, which has taken over Afghanistan. In an interview he went on to say that this time around, Taliban has come with a ‘positive mindset’.

“Taliban have come with a very positive mindset. They’re allowing ladies to work. And I believe Taliban like cricket a lot,” Afridi told the media in Pakistan on Monday.

❝Taliban have come with a very positive mind. They’re allowing ladies to work. And I believe Taliban like cricket a lot❞ Shahid Afridi. He should be Taliban’s next PM. pic.twitter.com/OTV8zDw1yu— Naila Inayat (@nailainayat) August 30, 2021

“Taliban is giving jobs to ladies, supporting cricket and the cricket series against Pakistan as well. Taliban is very positive towards cricket,” Afridi added.

Meanwhile, Former Test captain and renowned commentator Rameez Raja is set to replace Ehsan Mani as the next chairman of the Pakistan Cricket Board, source said on Saturday. Raja didn’t respond to calls and messages but media reports said that Prime Minister Imran Khan, who is also patron-in-chief of the board has decided against giving Mani extension after his term ends this month.

Apparently Imran Khan, himself a former captain under whom Rameez played the 1992 World Cup, feels it is time a former player runs the cricket affairs in the country. Another source said Ehsan Mani had also expressed reluctance to continue for another term due to health issues. The government and the board have already appointed a retired judge, Azmat Sheikh as the election commissioner to conduct the election process for the chairman’s post.

Indian Women’s Cricket Team “Somehow” Getting By In “Tiny Rooms” Of Government Quarantine In Brisbane, Says Report
India vs England: ‘Madness’, Twitterati shocked as R Ashwin is not selected for Oval Test too