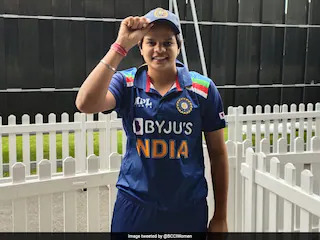 Shafali Verma on Sunday became the youngest Indian cricketer to make their debut across all three formats when India Women took on England Women in the first ODI in Bristol. While the explosive opener made her T20I debut in 2019 and played her first Test earlier this month against England Women. At 17 years and 150 days, she is the fifth youngest player to make her debut in all three formats of the game, and the third youngest among women.

Afghanistan’s Mujeeb Ur Rahman, at 17 years and 78 days, is the youngest cricketer to debut across all formats, followed by former England women’s team wicketkeeper Sarah Taylor. Australia Women all-rounder Ellyse Perry is third in the list, followed by Pakistan Mohammad Amir.

A proud moment for our thunderbolt @TheShafaliVerma as she is presented with #TeamIndia 🧢 131 from captain @M_Raj03. Here's hoping she has a smashing debut.💪 #ENGvIND pic.twitter.com/ZsmL9Jb68Y

Shafali Verma made 15 off 14 deliveries in her ODI debut, hitting three boundaries before being caught at mid-on.

While she fell for a duck in her T20I debut, her Test debut was a phenomenal one, as she became the youngest woman to hit two half-centuries in her first match.

With scores of 96 and 63, she is third in the list of most runs on debut in women’s Tests.