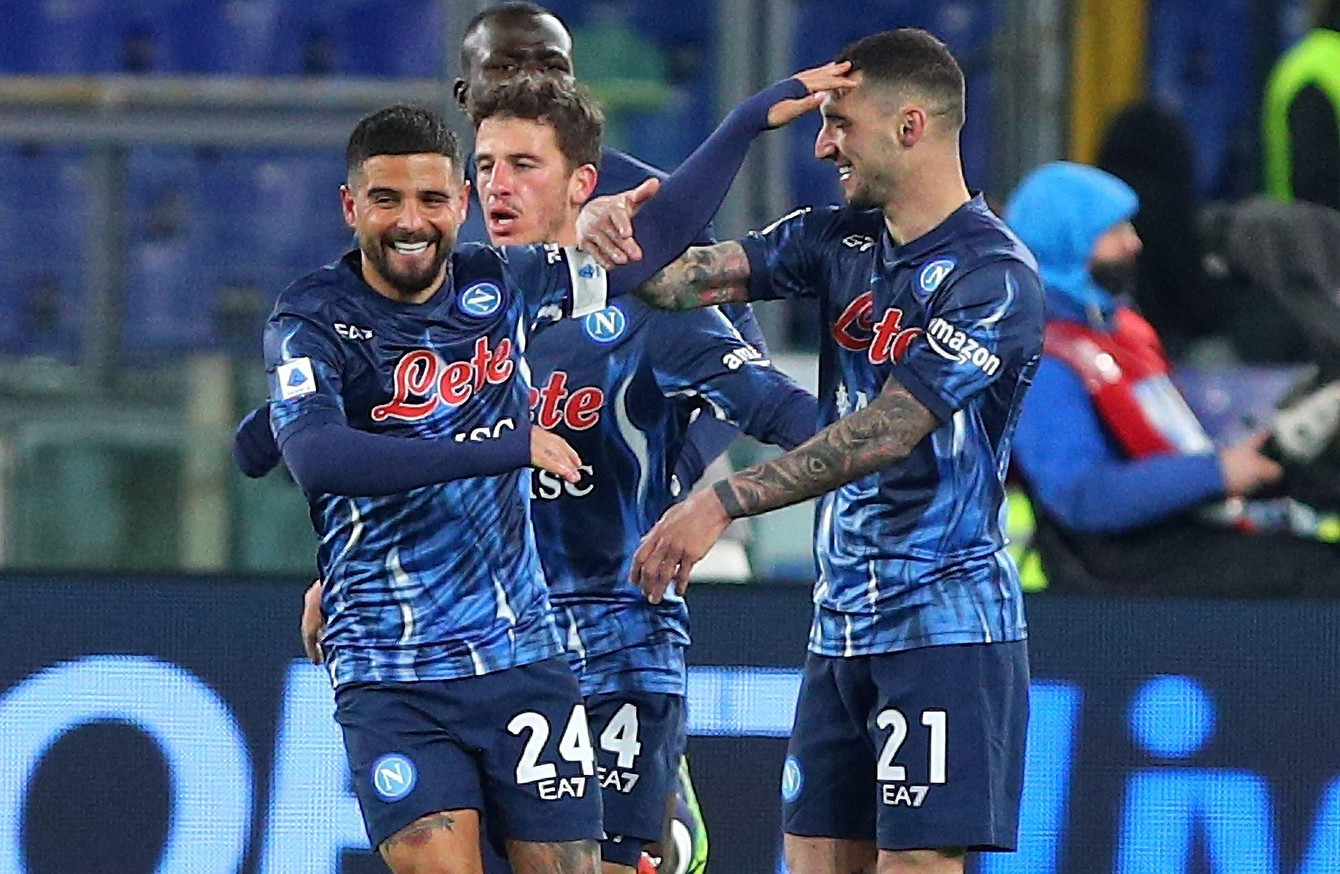 Fabian Ruiz shot Napoli top of Serie A on Sunday with a stunning, last-gasp winner in a thrilling 2-1 victory at Lazio.

Spain international Fabian crashed home a first-time strike in the 94th minute at the Stadio Olimpico in Rome to snatch first place from AC Milan on goal difference.

His goal came at the end of a hugely eventful match which Lazio thought they had drawn when Pedro crashed home a sumptuous volley with two minutes remaining to cancel out a superb 62nd-minute opener from Lorenzo Insigne.

Insigne’s first goal from open play this season banished the boos which accompanied his substitution during Thursday’s 4-2 thumping by Barcelona.

Fabian’s strike ensured that Luciano Spalletti’s side capitalised perfectly on both Milan and champions Inter, who sit two points back in third but with a game in hand, only managing to draw with relegation threatened opposition on Friday evening.

“Everyone breaks this team’s balls saying it doesn’t have character, I’d like to see what they’re saying now,” said Spalletti, irritated at criticisms of his team post-Barca.

“There’s a nasty atmosphere around this team because people are saying that the players are soft, that they don’t have character. Well tonight they had character, or no?”

Napoli host Milan next weekend in the latest episode of an exciting title race which also has Juventus creeping up on the leading trio, and will have a whole week to prepare for a huge match in Naples.

Milan and Inter meanwhile face off in the first leg of their Italian Cup semi-final on Tuesday night, with Inter hosting bottom side Salernitana this coming Friday.

Fabian’s goal, which fizzed past Thomas Strakosha and sparked wild celebrations among the Napoli players and fans, inflicted a harsh defeat on a Lazio team guided by ex-Napoli coach Maurizio Sarri whose bid for a Champions League place took a hit.

They sit seventh, seven points behind fourth-placed Juve and were overtaken by local rivals Roma who beat Spezia 1-0 thanks to a last-gasp goal of their own.

Tammy Abraham’s penalty in the ninth minute of stoppage time earned Roma a dramatic win over a Spezia team who had to play the entire second half with 10 men.

England international Abraham scored his 12th Serie A goal of the season. Spezia were so livid at the awarding of the spot-kick and Kelvin Amian’s sending off on the stroke of half-time that coach Thiago Motta demanded an apology from officials.

The penalty was given for Giulio Maggiore kicking Nicolo Zaniolo in the head as the Roma forward struck the bar with a header in the second of two incredible stoppage-time goalmouth scrambles, as Spezia — who are four points above the relegation zone — fought tooth and nail to hold off the away side.

“I still can’t find my words, I don’t know what happened today,” Abraham said to DAZN.

“The ball didn’t want to go inside. We tried, even me, I was on the line and I still couldn’t score. But the most important thing is we got the goal at the end and the three points.”

A point behind Spezia are Cagliari, who continued their remarkable new year’s revival by winning 2-1 at Torino to climb out of the drop zone.

The Sardinian side have picked up 15 points from their eight games since the winter break and sit 17th, three points ahead of Venezia who lost 3-1 at Verona thanks to a Giovanni Simeone hat-trick.

Simeone’s first goals of 2022 took his league tally for the season to 15 and moved ninth-placed Verona to within four points of the European places.