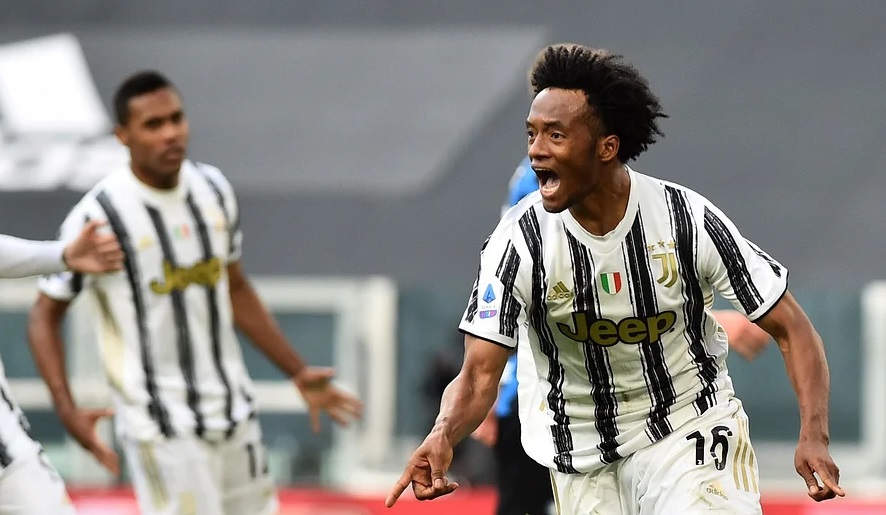 Juan Cuadrado scored twice, including a late penalty, as Juventus beat Inter Milan 3-2 to keep their Champions League hopes alive on Saturday in a game where three spot-kicks were awarded and both teams finished a man down. Juve moved up to fourth equal on points with third-placed AC Milan and two points ahead of Napoli who both play on Sunday. The win ended the 20-match unbeaten run for Antonio Conte’s Inter who had denied Juventus a 10th consecutive league title this season.

“It was important for us to win so we can keep hoping,” said coach Andrea Pirlo.

“If we’d shown the same desire and determination as in our last few games, we’d be in a different position.

“If we’re going into the final game of the season fighting for fourth place, clearly we’ve come up short somewhere.”

Cristiano Ronaldo missed a penalty after 24 minutes but turned in the rebound to bring his tally to a Serie A leading tally 29 goals this campaign.

But Inter got back level nine minutes later with a Romelu Lukaku penalty, to move him second behind Ronaldo with 23 goals.Juve pulled ahead before half-time when Cuadrado blasted in past Samir Handanovic.

But the hosts played most of the second half a man down after Rodrigo Bentancur was sent off for a second yellow card for a Lukaku tackle.Ronaldo was substituted off with 20 minutes to go with Alvaro Morata coming off the bench.

“Cristiano was perhaps happy for the first time to be subbed off because we were down to 10 and he would have had to run in a vacuum for the rest of the game,” said Pirlo.

Captain Giorgio Chiellini turned into his own net with seven minutes to go but in a dramatic end to the game Juve were awarded another penalty for an Ivan Perisic foul on Cuadrado which the Colombian converted.

Inter also finished the game a man down with Marcelo Brozovic getting a second booking in injury time.

“This is a massive win,” said Chiellini.

“I don’t know if it will help us qualify for the Champions League but at the moment we deserve the position we’re in.

“We haven’t been consistent enough and we know that.”

Earlier Atalanta sealed their spot in the Champions League for a third consecutive season with a 4-3 win over Genoa.

The Bergamo side are second, three points ahead of AC Milan and Juventus, and are assured of elite European football before the two teams go head-to-head next weekend.Atalanta paved the way with three first half goals.

Ruslan Malinovskyi set up Duvan Zapata for the opener and then scored himself, with Robin Gosens grabbing a third before the break.

Mario Pasalic added a fourth six minutes after the break before 14th-placed Genoa hit back with an Eldor Shomurodov brace either side of a Goran Pandev goal just after an hour.

“For us, returning to the Champions League this year tastes better,” said coach Gian Piero Gasperini, who brought the Bergamo side to elite European football for the first time in the 2019-2020 season.

“Three times in the Champions League is a great achievement. The trophy would be the icing on the cake, but we are convinced that we have won a lot anyway.”

Even if Milan, who host 16th-placed Cagliari on Sunday, win their last two matches, Atalanta are now assured of a top-four finish.

Roma won their first derby since 2018 against Lazio 2-0 with goals in either half from Henrikh Mkhitaryan and Pedro, ending their city rivals’ hopes of a return to the Champions League.

Lazio are eight points behind Juventus having played a game less.