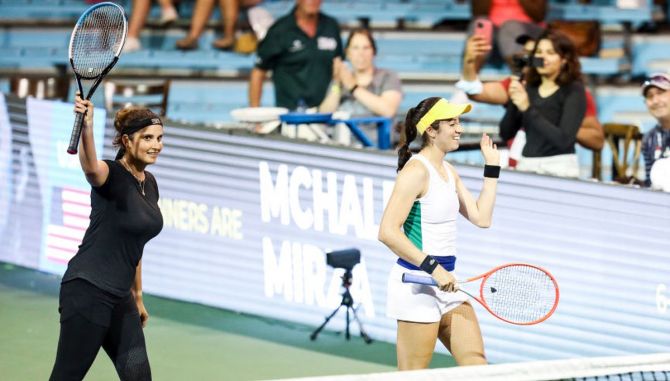 The Indo-American pair of Sania Mirza and Christina McHale have booked their spot in the women’s doubles final of the Tennis in the Land tournament with a straight-set win. It took Mirza and McHale just one hour and twenty-three minutes to beat the Norwegian-American pair of Ulrikke Eikeri and Catherine Harrison 7-6(5), 6-2 in the semifinals of the WTA 250 tournament in Cleveland.

They are yet to drop a set in the tournament as they had defeated Czech Republic’s Hradecka and her Chinese partner Zhang 6-3 6-3 in the quarterfinals. While they beat  Georgia’s Oksana Kalashnikova and her Romanian partner Andreea Mitu 6-3 6-2 in the opening round.

Ladies and gentlemen: our first doubles finalists. (All three of them!)

In the final, the unseeded pair will take on top seeds Shuko Aoyama and Ena Shibahara of Japan.

After the semi-final, Sania Mirza brought her two-year-old son Izhaan on court for the post-match chat and spoke about how being a mother was a new start.