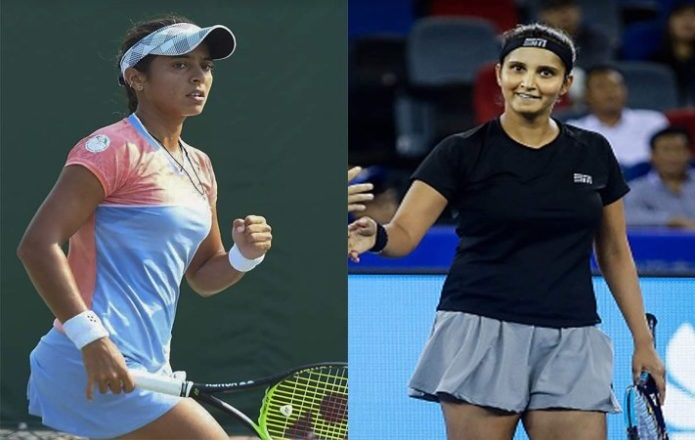 Raina was already in Dubai competing in an ITF tournament in the last week of March, while Mirza was forced to pull out before the WTA Miami Open last month after an injury to her partner Kim Clijsters.

With a crowded professional tour calendar and different training and tournament destinations, it’s not often that two of India’s top professional tennis players decide to get together and practice in the lead-up to a national assignment. But when Sania Mirza invited Ankita Raina for a stay-and-play week in Dubai before joining the rest of the squad in Latvia to face the hosts in the Billie Jean King Cup World Group Play-offs tie from Friday (a first at the World Group stage for the Indian team), the latter was all too thrilled to oblige. “I grabbed the opportunity with both hands. It was the best plan,” Raina said.

Raina was already in Dubai competing in an ITF tournament in the last week of March, while Mirza was forced to pull out before the WTA Miami Open last month after an injury to her partner Kim Clijsters. “It was really kind of her to invite me to stay and train with her,” Raina said over the phone from Latvia. “It was great because I’ve been away from home for quite some time now and she knows it better than anyone!”

During the course of the last week, the country’s leading women pros fine-tuned their doubles game apart from the six-time Grand Slam champion Mirza imparting her vast experience and expertise at tennis’ highest level to the 28-year-old Raina, who made her Slam debut in doubles at this year’s Australian Open. “Not only did we work on tactics and court positioning in doubles, but Sania also helped me with my singles play where we did a lot of drills,” Raina said.

“It was really good to hit and get some chemistry between us,” Mirza said from Latvia. “I’m always there to help the younger girls. Ankita is a very disciplined and hardworking girl. And it was nice to be able to connect off the court as well.”

Through chatting, creating dance videos, and having some playtime with Mirza’s son, Izhaan. “The conversations with her outside the court really gave me an insight into the tennis world from a different perspective. One of the things that I picked up is that she’s so relaxed and doesn’t stress about things unnecessarily,” Raina said.

That attitude reflected in Mirza’s words during the team meeting in Latvia to the inexperienced Indian squad captained by Vishal Uppal that also comprises 22-year-old Karman Kaur Thandi, Rutuja Bhosale, 25, and Zeel Desai, 22.

“Literally the only thing I told them was to enjoy the moment. Don’t get caught up in too many details. Understand that the pressure is not on us, it’s on them. We’ve got nothing to lose,” Mirza said. “All the players are young, eager and professional, and this will be a good experience for them to understand what it takes to make that next jump and measure up against these top players.”

The Latvia squad has two of them ranked inside the world’s top-60 in singles: Anastasija Sevastova (world No. 47) and 2017 French Open champion Jelena Ostapenko (52). Raina, India’s top-ranked in singles at 174, will begin the tie on Friday against Ostapenko before the 621st-ranked Karman Kaur Thandi—who returned to tennis earlier this year after more than a year off with injury—faces Sevastova. The two will switch opponents in the reverse singles on Saturday. The concluding doubles encounter could be relatively easier for India, with the Mirza-Raina pair taking on Diana Marcinkevica (world No. 326 in doubles) and Daniela Vismane (709). The hosts have chosen to play on the indoor hard courts of the National Tennis Centre Lielupe in Jurmala

India made the historic qualification for the Billie Jean King Cup (formerly called Fed Cup) World Group play-offs after finishing second in the Asia/Oceania Group I tie held in Dubai last March. They’re up against a Latvian outfit that gave the top-seeded USA led by Serena Williams and Sofia Kenin a big scare in last year’s Qualifiers before losing 2-3. Latvia is 13th in the current team rankings; India is 56th.

Like in the Asia/Oceania group event where she turned up for both singles and doubles in three of the five matches, Raina will have to carry the bulk of the load this time too by playing three matches in two days. “I’ve got my best results when playing for India. Even in the earlier groups, I was playing two matches throughout the week. So I’m more than ready for this challenge,” Raina said after the draw ceremony on Thursday.