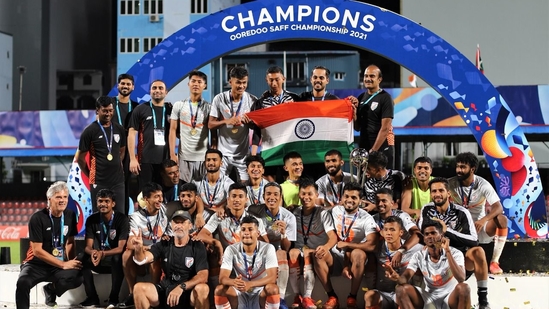 India winning the SAFF Championships for an eighth time is not a “special success” as the country is dominant in the South Asian region and the bigger aim is to do well in the 2023 Asian Cup qualification, national football team head coach Igor Stimac said on Wednesday. India won the regional tournament after beating Nepal 3-0 in the final in Male on Saturday to hand Stimac his first trophy as in-charge of the team.

“I don’t consider it (the SAFF title) as a special success because it is normal that India wins when it goes to SAFF but it demonstrates that we are very dominant in this competition and we can progress in our game a lot more,” Stimac said at a virtual interaction. He, however, admitted that his team was under a lot of “result pressure” after drawing Bangladesh (1-1) and Sri Lanka (0-0) in the first two round-robin league matches.

The results had put India in danger of going out of reckoning for the final. India then beat Nepal 1-0 and hosts Maldives 3-1 in must-win matches before outplaying the Himalayan country 3-0 in the summit clash to stamp their authority.

“It was obviously a difficult situation we found after the first two matches but they looked bad only because of the results. There was no big difference in approach, the numbers and statistics, we had enough shoots, scoring chances, movement and energy by players.

“We scored sometimes and didn’t score sometimes and that made the difference. So, we had a lot of results pressure on our shoulders but we dealt with it the way it should be and in the end we won the trophy which was really important.” Stimac was speaking from Bengaluru after his return from Maldives and he is leaving for Dubai Tuesday night with the U-23 national team, which he has taken charge of for the 2022 Asian U-23 Championships qualifiers in the UAE from October 25 to 31.

The Croatian gaffer said that the side’s aim is to make it to the 2023 Asian Cup for which the qualification third round is set to begin early February next year. That could be tricky as the Asian Cup qualification matches would be outside of FIFA window and the federation will need to convince the Indian Super League organisers and clubs to release players for national duty.

“We don’t know yet who we are going to play, we don’t know our group yet. But we need to prepare ourselves because we have been told our first game will be on February 1. If we are going to succeed in this qualifier which are games to play outside FIFA window, we need to sit down with other stakeholders in domestic competitions (read ISL), how much time the national team players will get for preparation.”

The ISL organisers have issued the fixtures of the first leg of the league from November 19 to January 9. They have not yet announced the second leg fixtures. He said the national team would need good preparation time to produce good results in the Asian Cup qualification matches.

“Otherwise, we are going to gamble, as simple as that,” he quipped. “Because the players will begin ISL season now and we need to make sure as soon as possible that this February opening of the third round of qualifications (for Asian Cup) is part of the ISL calendar so that the players are released for national team duty.”

Stimac was also all praise of the talismanic captain Sunil Chhetri, who at 37 is one of the fittest players in the team.

“His influence is keeping the team going. He is a role model and leader off and on the field. He is the most passionate player in the dressing room and his fitness level is unbelievable. He is in the best shape possible and that is why he played in all the matches (of SAFF Championships). When somebody who can score better and who has better fitness (comes along), only then he can be replaced, otherwise you cannot replace him and he keeps on playing till the time he is with the team.”

Chhetri netted five out of India’s eight goals to emerge as the best player and highest scorer in the regional tournament in Maldives. He was named the most valuable player for the third time in as many appearances in the tournament, the earlier instances being in 2011 and 2015. He was the highest scorer in the 2011 edition in New Delhi with seven goals while finishing joint second with three goals in the 2015 tournament in Thiruvananthapuram. India won all the three editions Chhetri played in.