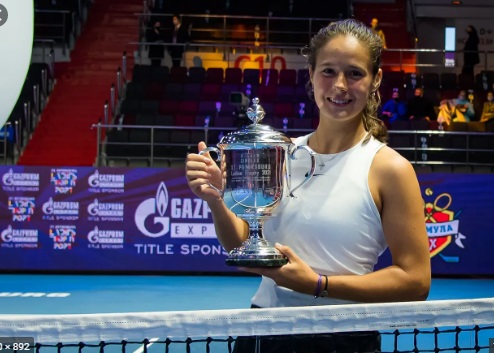 Daria Kasatkina became the first player to win two WTA tournaments in 2021, capturing her fourth career title at the St. Petersburg Ladies Trophy when Margarita Gasparyan retired with a lower back injury trailing 6-3, 2-1.

Already a champion last month at the Phillip Island Trophy, Kasatkina’s record this year is now 15-4, and she has spent the week underlining her renaissance on home soil. Having halted Danish teenager Clara Tauson’s winning streak in the first round, No.8 seed Kasatkina came from a set down to win three straight matches against Aliaksandra Sasnovich, No.2 Veronika Kudermetova, and No.4 Svetlana Kuznetsova to reach the final.

It was the 30th all-Russian final this century and resulted in Kasatkina becoming the first player to win both WTA 500 events on Russian soil in her career. Her 2018 Moscow title was her last at this level before this week – a run that lifted her into the Top 10 for the first time.

After slumping in 2019 and sinking to a low of World No.75 last October, Kasatkina, 23, will be back inside the Top 50 rankings next week. The St. Petersburg title marks the first time that Kasatkina has won multiple tournaments in one season.

“My coach was telling me the best medicine is to win matches, and that’s 100% true,” Kasatkina said afterward.

Kasatkina was also satisfied with how she had managed expectations at home.

“I’m proud of how I was able to manage the pressure,” she said. “I felt differently during this tournament and I’m really proud of that.”

The result was an unfortunate ending for Gasparyan, who has been plagued by injuries over the course of her career. The 26-year-old took a medical timeout after losing her first two service games of the match to trail 1-4, and though her contributions to the contest were intermittently spectacular, she did find the consistency needed to pressure Kasatkina.

After dropping serve after double-faulting twice from 40-0 up in the second set, Gasparyan was forced to call it quits. However, the wildcard can still take positives from a breakthrough week, with her maiden WTA 500 final enabling her to return to the Top 100.

Earlier, No.1 seeds Nadiia Kichenok and Raluca Olaru captured their first title as a team with a 2-6, 6-3, [10-8] victory over No.2 seeds Kaitlyn Christian and Sabrina Santamaria. The Ukrainian-Romanian pair came from 3-6 down in the match tiebreak to win the first title at WTA 500 level for both players. Both Christian and Santamaria fell to 0-4 in the WTA finals overall.

“I didn’t feel nerves, I felt frustration,” Kichenok said. “I was frustrated the whole match with how I played and we were just trying to hang in, play every ball – that’s what you do in these super tiebreaks, it doesn’t matter what the score is.”

Kichenok and Olaru had played together twice before this year, at Roland Garros 2015 and Moscow 2019, but this could be the start of a longer-lasting partnership.

“We are taking the plane together to Miami where we will play. … Yes, we will try to play the clay-court tournaments together and I hope we can do some damage.”

Serena Williams pulls out of Miami Open : “I am disappointed to withdraw from the Miami Open because of recent oral surgery.
Del Potro to have knee surgery hopes to play in Tokyo(Juan Martín del Potro has been sidelined since hurting his knee in the first round at Queen’s Club in June 2019 and has already had three surgeries on the injury)