Rohit Sharma trusts me a lot, gives freedom to do whatever I want, says Jasprit Bumrah 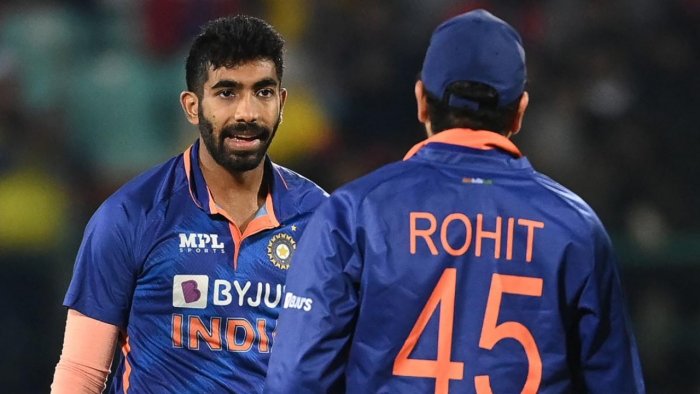 New Delhi: Rohit Sharma’s trusted lieutenant Jasprit Bumrah says the India skipper has always had unflinching faith in his ability, backing him to bowl the most important overs even when he was new at Mumbai Indians, and now gives him the freedom to do things his way. If Bumrah is to be believed, then Rohit has played a crucial role in his development as one of the world’s premier fast bowlers.

“When I came into the side Ricky (Ponting) was the captain and I was not playing regularly. I started playing a lot under Rohit, he had a lot of confidence in me. He instilled a lot of confidence,” Bumrah said during a conversation with India team-mate Ravichandran Ashwin on the senior off-spinner’s DRS With Ash episode on his YouTube channel.

“He (Rohit) saw me bowling at nets, he saw what kind of skills that I have so he always backed me and always told me to believe in myself and in the initial stages as well he had a lot of trust in me, so he will give me the important overs.

“That tells me that okay I can do the job, sometimes you are still trying to convince that okay maybe it is the right call that I am doing the tough job, but they have put you into the tough zone so then you will find a way how to come out of it. The relation has been same.”

Since bursting into the scene with the IPL in 2013 and the international arena in 2016, Bumrah has grown into a fine pacer, his unorthodox action only adding to the package.

Both Rohit and Bumrah have been synonymous with five-time winners Mumbai Indians unprecedented success in the IPL.

On Rohit, Bumrah continued, He “has a lot of trust in me till date and so now we have reached a point where he doesn’t even tell me what do you want to do. He says ‘you set the field on your own and if there are any changes you tell me and I will do that'”.

“That amount of trust has happened. He has had that trust because he has followed whatever I have said, asked for a field and that has worked so the relationship has really developed.

Rohit is known for his calm demeanour and leads the team by example, something that has impressed Bumrah.

“It’s always very chill, some days things might not go well but he always has kept the atmosphere in our team very simple, and he has always tried to keep it very calm. All these things have really helped me as a cricketer, maybe not get overawed.

“He has a lot of trust and that is always the best place for me as a bowler because, then, I have got the freedom to do whatever I want to. That is really beneficial for me as a bowler and it’s very important for me going further.”

Appointed vice-captain for the ongoing series against Sri Lanka, Bumrah said he doesn’t go around looking for “post” but will “never shy away” from the responsibility of leading a team if given.

“I don’t like to chase things because I don’t want to… See I am a person who believes that God has a plan and everything will find out its own way, so I don’t like to hamper the plan that is there. I try to never change anything.

“Whatever role is asked of me I would do it with the best ability that I can. I don’t want to change the whole organisation, you are always a leader when you are a senior member of the team so it’s just a post that comes with you.

“Basically, you try to help all the people in whatever capacity you can. Even in Mumbai Indians, you have got a lot of senor players but now I am one of the senior players as well so you help the captain, you help everyone, you play the leadership role even when you are not asked to.

“That’s how I look at it. I never want to, you know, just for personal satisfaction have that okay I want to be in this I have to be the captain. It’s just a post, it’s just a name, you have to do your job and you have to help people in the best way you can.

“Yes, if given an opportunity at any scenario, it would be an honour and I would never ever shy away from that, but it is something that I don’t go looking for.”

Never realised I had an unorthodox action

The fast bowler further admitted that he never realised that he had an unorthodox action until his IPL journey began.

“I didn’t realise that the action was that fascinating and eventually, people started to analyse that. But for me, as I told you, I was more interested in getting new things. I have that big inswinger but I didn’t have that outswinger.
“Since childhood, I wanted to be able to bowl all deliveries. I enjoyed all of those deliveries as a child, I was never interested in watching big sixes or high-scoring games.

“I was interested in watching stumps being rattled, people getting hit. But yes, not getting seriously hit!” said Bumrah.

During the conversation, Bumrah also opened up on his first call-up to the Mumbai Indians camp.

The 28-year-old revealed that he had troubled the legendary Ponting with his deliveries during a net session.

“Basically, I had gone into the Mumbai Indians camp and I was not going to play the first game because I and Axar Patel had joined the camp late. We were playing in the Syed Mushtaq Ali Trophy. We had been called late to the camp,” Bumrah said.

“The team was already practising in Bangalore and we practiced with the team only for two days. Over there, the practice wickets were very green, and back then in 2013, the white ball used to swing.

“So, I was bowling with the new ball. I was bowling to Ricky Ponting and I used to bowl those big inswingers.
“I troubled everyone and I got him (Ponting) out two or three times, so they had a discussion on me that ‘this guy had something different and let’s play him’,” Bumrah said.