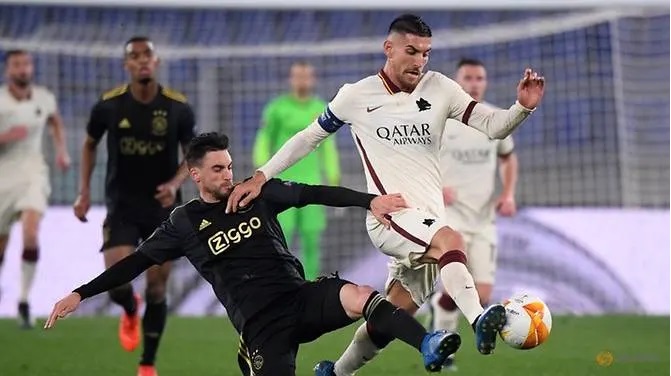 The Italian side will now face Manchester United, who beat Granada 2-0 on the night and 4-0 on aggregate in their quarter-final second leg, for a place in next month’s final.

AS Roma advanced to the Europa League semi-finals with a 3-2 aggregate win over Ajax Amsterdam after Edin Dzeko’s late equalizer secured a 1-1 home draw on Thursday.

The Italian side will now face Manchester United, who beat Granada 2-0 on the night and 4-0 on aggregate in their quarter-final second leg, for a place in next month’s final.

Brian Brobbey struck for Ajax four minutes after his half-time introduction but Dzeko’s 72nd-minute finish levelled the scores in the quarter-final second leg.

The visitors dominated possession and had a second goal disallowed for a Nicolas Tagliafico foul but struggled to again break down a resolute home defense despite a late onslaught.

“We had more problems in Amsterdam, but today we controlled them well,” Roma coach Paulo Fonseca told Sky Italia. “Ajax is a very strong team with great quality, but defensively we played a great game.”

It was another frustrating night for Ajax, who finished both legs with more shots on target and possession than their opponents but could not make their dominance count.

“The best team has been eliminated. The team that dominated both matches. It’s such a shame,” Ajax coach Erik ten Hag told RTL7. “Just like last week we created plenty of chances, but failed to take advantage of them.”

Roma is Italy’s last remaining representative in European competition this season, and the clash with United will be their first European semi-final since a 7-6 aggregate defeat by Liverpool in the 2017/18 Champions League.

“It’s satisfying. Reaching a semi-final is cause for pride, we are representing Italy at the moment that’s a source of pride for Roma,” Fonseca added.

Roma threatened early on as Lorenzo Pellegrini sprinted half the length of the pitch but was let down by a weak finish, and Jordan Veretout’s close-range effort was ruled out for offside.

The visitors’ best chance of the first half came courtesy of a Roma error when Antony intercepted a careless pass by goalkeeper Pau Lopez and cut across back to Davy Klaassen, but the midfielder was denied by a crucial Amadou Diawara block.

Ajax had 75% of the possession in the first half without finding a breakthrough but it eventually came four minutes into the second half when 19-year-old Brobbey latched onto a long ball and knocked a finish beyond the onrushing Lopez.

It was the Netherlands Under-21 striker’s third goal from the bench in the Europa League this season, more than any other player.

Ajax was in the ascendancy and found the net again when Dusan Tadic fired home after a Lopez parry, but his effort was disallowed following a VAR review for a previous Tagliafico foul on Henrikh Mkhitaryan.

Roma’s chances were few and far between but striker Dzeko clinically took his when a deflected cross fell into the Bosnian’s path at the back post for a tap-in.