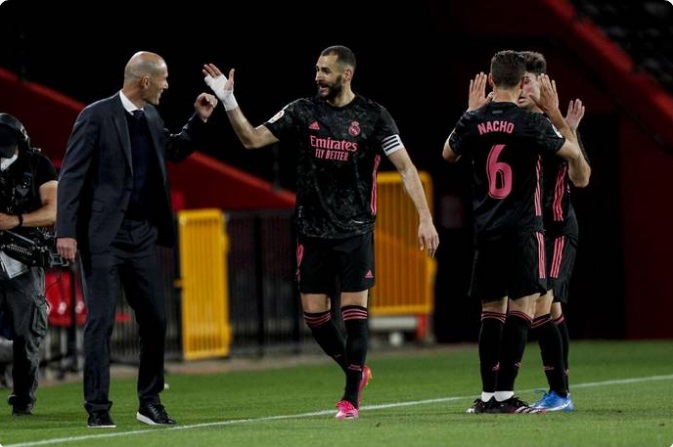 Real Madrid is not letting up in its quest to catch Atletico Madrid and repeat as Spanish league champion.

Madrid won 4-1 at Granada on Thursday to stay within range of leader Atletico entering the final two rounds.

Luka Modric and Rodrigo scored in the first half and Alvaro Odriozola and Karim Benzema added goals in the second to leave the defending champion two points behind Atletico, which won 2-1 at Real Sociedad on Wednesday to close in on its first league title since 2014.

“We will keep putting pressure on Atletico and hope that it doesn’t win one of its last two matches,” Madrid goalkeeper Thibaut Courtois said.

“We showed that we will keep winning and that they won’t have any margin for error.”

Third-place Barcelona was still in contention despite falling four points off the lead after being held 3-3 at Levante on Tuesday after squandering 2-0 and 3-2 leads.

For the first time since the 2007-08 seasons, Madrid, seeking back-to-back league titles, has the advantage in the head-to-head tiebreaker against both Barcelona and Atletico.

A draw by Atletico in one of its final two matches — against midtable Osasuna and relegation-threatened Valladolid — would be enough to allow Madrid to win the title with two consecutive victories. Madrid theoretically has more difficult matches, though, at ninth-place Athletic Bilbao and home against seventh-place Villarreal in the final round.

“We will give everything we’ve got until the last minute,” Madrid coach Zinedine Zidane said.

Barcelona, trying to win the league for the third time in the last four seasons, has its last two matches against eighth-place Celta Vigo at home and last-place Eibar.

Modric opened the scoring for Madrid in the 17th minute with a shot that went through the goalkeeper’s leg after a nice lob pass by youngster Miguel Gutierrez, and Rodrygo added to the lead with a low shot from inside the area in first-half injury time.

The host pulled one closer through Jorge Molina off the rebound of a Courtois save in the 71st, but Madrid quickly added to the lead to seal the victory with goals by Odriozola in the 75th and Benzema in the 76th, the latter a long-range strike into the open net after Granada goalkeeper Rui Silva was caught away from his area.

Madrid got the win despite playing without several regular starting defenders. Zidane had to start the match with a few “B” team players, including Gutierrez and Marvin. Toni Kroos stayed on the bench, while Marco Asensio and Eden Hazard came on during the second half.

Villarreal kept alive its hopes of securing a Europa League spot by winning 2-0 at Valladolid with second-half goals by Gerard Moreno and Etienne Capoue. The result left Valladolid inside the relegation zone.