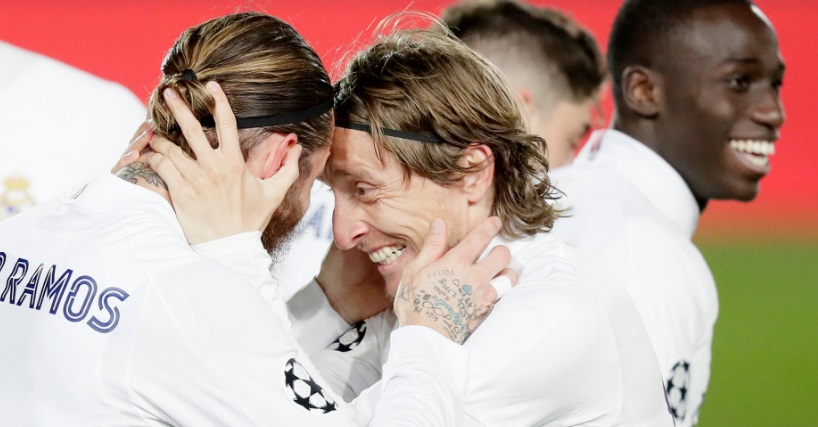 Real Madrid reached the quarter-finals of the Champions League for the first time in three years after blitzing Atalanta 3-1 at the Alfredo Di Stefano stadium in Madrid on Tuesday.

Goals from Karim Benzema and Marco Asensio, either side of a Sergio Ramos penalty, condemned La Dea to a comprehensive defeat on the night.

Luis Muriel was on target for the visitors with a sublime free-kick in the 83rd minute, but it was nothing more than a consolation as Gian Piero Gasperini’s side saw their European journey come to an end. Real Madrid were the dominant side right from the start and deservedly went through with a 4-1 aggregate win. They will now learn their last-8 fate after Friday’s draw.

Pep Guardiola told his Manchester City players to forget their previous Champions League failures after cruising into the quarter-finals with a 2-0 win over Borussia Monchengladbach on Tuesday that sealed a 4-0 aggregate victory.

The Champions League is the one trophy that has remained elusive to Guardiola during his five years in Manchester with City failing to ever get beyond the last eight under the Catalan.

Real Madrid avoided another early Champions League exit on Tuesday by beating Atalanta 3-1 to win the tie 4-1 on aggregate and reach the quarter-finals for the first time in three years.

Sergio Ramos marked his return from injury by converting a penalty after Karim Benzema continued his scoring streak by capitalising on a glaring error from Atlanta goalkeeper Marco Sportiello.

Sportiello’s scuffed clearance in the first half resulted in Benzema being given an easy finish at the Alfredo di Stefano stadium and after an electric start, Atalanta never really recovered.

Remo Freuler’s red card and a late goal spoiled the Italians’ night in Bergamo and it was individual errors from Sportiello and then Rafael Toloi for the penalty that let them down again here.

“We started strong and we were succeeding with our pressing,” said Muriel. “It’s a shame because from our two mistakes came the two goals that cut our legs from under us.”

Karim Benzema scored a sixth goal in five games to put the 13-times European champions in charge after 34 minutes while captain Sergio Ramos converted a penalty on the hour mark.

The Italian side managed to get one goal back thanks to a free kick from Luis Muriel in the 83rd but any hope they had of making a comeback was quickly dashed a minute later by a low strike from Real substitute Marco Asensio.

Real, who were knocked out in the last 16 by Manchester City last term and Ajax Amsterdam the season before, reached the last eight for the first time since 2018.

They will be the only Spanish side left in Europe’s elite club competition unless city rivals Atletico Madrid overturn a 1-0 deficit at Chelsea on Wednesday.

Atalanta had pulled off away wins over European giants Liverpool and Ajax in the group stage and nearly got off to an ideal start when Robin Gosens met a Muriel cross in the third minute but was thwarted by goalkeeper Thibaut Courtois.

The Serie A side continued to harass Real with their high pressing but the hosts slowly managed to pass their way out of trouble thanks to the experienced heads of midfield duo Toni Kroos and Luka Modric.

Real found the breakthrough on the night thanks to some high pressing of their own which saw Modric stick out a leg to block a kick out from Atalanta keeper Marco Sportiello and then square the ball to Benzema, who calmly stroked it into the net.

The home side’s Brazilian forward Vinicius Jr should have doubled their lead after a superb move involving left back Ferland Mendy but after doing the hard part to coast past Atalanta’s defence he missed the target from close range.

He made amends by bursting into the area and drawing a foul in the box by Rafael Toloi, allowing Ramos to blast just beyond the outstretched Sportiello and effectively end the tie as a contest, scoring his 101st goal for the club in the process.