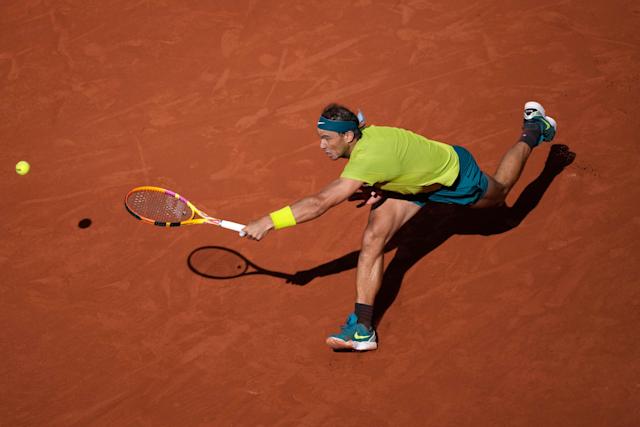 Rafael Nadal knew this was bound to happen. So, too, did his uncle, Toni Nadal, who coached Rafael to most of the nephew’s men’s-record 21 Grand Slam titles.

Also well aware this moment would come, of course, was Felix Auger-Aliassime, the promising player who brought aboard the man known to many simply as Uncle Toni for some extra assistance last year.

Once Toni and Rafael ended their professional partnership, and once Auger-Aliassime hired Toni to work in tandem with full-time coach Frederic Fontang, they all figured that somewhere, sometime, their paths would cross. Now it’ll happen in the French Open’s fourth round: Nadal vs. Auger-Aliassime. Which in some ways is also a matchup of Nadal vs. Nadal.

So, the 13-time champion at Roland Garros was asked, might there be some awkwardness there? Probably no way you’ll be chatting with your uncle ahead of Sunday’s meeting against the ninth-seeded Auger-Aliassime, a 21-year-old from Canada, right?

Nadal shook his head and said he already had spoken to Toni straight after beating 26th-seeded Botic Van De Zandschulp 6-3, 6-2, 6-4 on Friday.

“For me, it’s very simple. He’s my uncle. I don’t think he will be able to want me to lose, without a doubt, but he’s a professional and he’s with another player,” said the fifth-seeded Nadal, who has dealt with chronic foot pain and a rib injury this season but also won the Australian Open in January.

“It’s not a story at all for me. I know what the feelings are that we have between each other. I know he wants the best for me. Now he’s helping another player,” he said. “But honestly, for me, it’s zero problem.”

Auger-Aliassime, meanwhile, resolved one little bit of intrigue, saying that he expected Uncle Toni to sit in a neutral spot in the stands, rather than being forced to choose between one player’s guest box or the other.

As for what sort of insights Toni might reveal about his former player to his current one, Auger-Aliassime smiled. Not too many unknowns about Rafael at this point, not at age 35, not after so many years on tour.

On the horizon is the prospect that if Nadal wins, he could find yet another familiar face in the stadium for the quarterfinals: defending champion Novak Djokovic.

Both the top-seeded Djokovic, who beat Aljaz Bedene 6-3, 6-3, 6-2 on Friday and now takes on 15th-seeded Diego Schwartzman, and Nadal have won all nine sets they’ve played on the red clay of Paris so far. And both have ceded just 23 games total.

They have played each other 58 times already, more than any two other men in the Open era, and No. 59 might come next week. Asked earlier in the tournament about that “pretty good lefty in your quarter of the draw,” Djokovic played dumb and joked: “I don’t know who you are talking about.”

Nadal is no fan of night sessions at Roland Garros

Rafael Nadal enjoys a near mythical status at Roland Garros where he has won a record 13 French Open titles and has a statue erected in his honour, but the Spaniard is no fan of the night sessions at the claycourt Grand Slam.

The night session, for which Amazon has exclusive television broadcasting rights in France, starts at 9 p.m. local time and was introduced for the first time at the 2021 edition of the major.

Organisers the French tennis federation (FFT) have previously faced criticism for matches finishing too late and Nadal, who has won a men’s record 21 majors, said conditions in Paris were not suited for such a late start on clay.

“I don’t like night sessions on clay. I am very clear with that,” Nadal, who reached the fourth round on Friday by beating Dutch 26th seed Botic van de Zandschulp, told reporters before lauding organisers for the constant development of the site.

“I don’t like to play on clay during the night because humidity is higher, the ball is slower and there can be very heavy conditions especially when it’s cold.

“I think that makes a big difference on the way you play tennis on clay during the night and during the day.”

The U.S. and Australian Open tournaments also have night sessions but, unlike the French Open, feature more than one match.