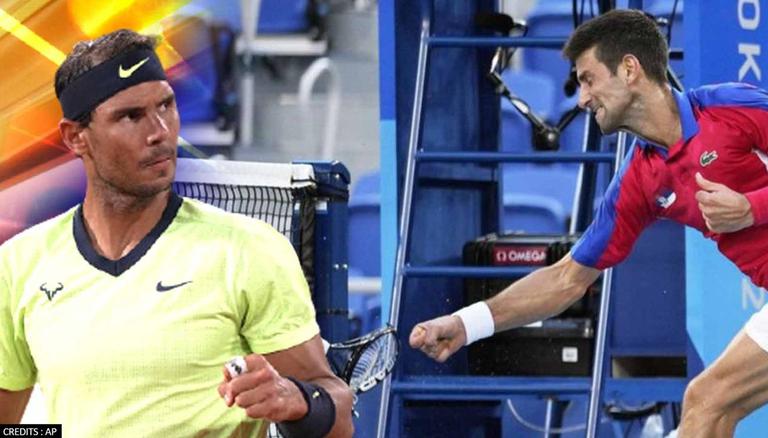 World number one Novak Djokovic may be one of the greatest players of all time in men’s singles tennis, but he certainly has room for improvement when it comes to controlling his emotions. Djokovic was seen smashing and throwing his racket away during his loss to Spain’s Pablo Carreno Busta in the bronze medal match at the Tokyo Olympics. The Serbian finally lost the match 6-4, 6-7, 6-3. While reflecting on the incident, longtime rival Rafael Nadal gave his opinion on why Djokovic needs to control his anger.

Novak Djokovic understandably faced immense criticism after losing his cool once again in the bronze medal match of the Tokyo Olympics. Since Djokovic is currently the world number one, Rafael Nadal believes the Serbian ace needs to hold higher standards of behaviour. Nadal spoke of the incident while gearing up for the Citi Open.

“Luckily there were no people in the stands and nothing else happened, but hey, they are things that happen from time to time. You have to try to avoid them. The image is not the best. It is important to avoid this, especially as a role model for many children. He is the number one in the world and one of best in history. It’s strange that someone so successful reacts this way from time to time, but in the end he’s very competitive and reacts like that,” said Nadal, perhaps with an eye on mindgames on the road to the final Grand Slam of the year.

The biggest reason for Novak Djokovic’s frustration in the match against Pablo Carreno Busta was most likely down to the fact that he failed to win the elusive golden slam. The 20-time Grand Slam champion, who won in Australia, France and Wimbledon earlier this year, lost to Germany’s Alexander Zverev in the Tokyo Olympics semi-finals. Winning a golden slam requires a tennis player to win all four Grand Slams and the gold medal at an Olympics event in the same calendar year. The only player to achieve this feat is Steffi Graf when she won it in 1988.

Ahead of the Tokyo Games, Djokovic was tipped to win the gold medal considering his stunning season so far. The 34-year old had won a remarkable 22 consecutive matches before losing to Zverev in the semis of the Olympics. While Djokovic can no longer win the golden slam, he can still win the calendar-year Grand Slam by winning the U.S. Open. The last man to achieve this feat was Rod Laver in 1969. Furthermore, with Djokovic, Federer and Nadal locked on 20 Grand Slams each, a US Open title would give the winner a huge leg up in the pitched battle to be the ‘GOAT’ of Tennis.

The bronze medal match between Novak Djokovic and Pablo Carreno Busta turned ugly as the world number one had multiple outbursts. In the first instance, the Serbian threw his racket in the stands after losing a frustrating point. However, he had a worse outburst in the third set when he was 3-0 down, as he smashed his racket at the net. Both videos can be seen below.

Djokovic just tossed his racquet into the stand. No warning. pic.twitter.com/TMCv29dCnQ

Djokovic then got a warning for this. Pablo asked how he was not given a point penalty. pic.twitter.com/0MWzeZV8Y9