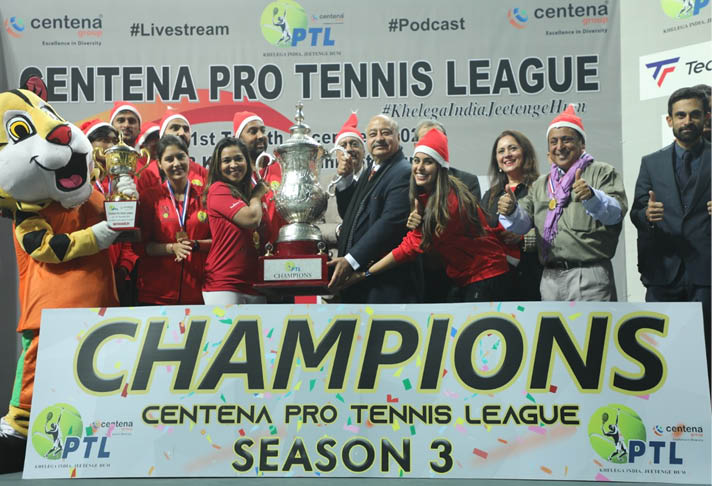 Davis Cupper Saketh Myneni led Team Radiant to the trophy with a 22-18 victory over Bangalore Challengers in the final of the Centena Pro Tennis League here on Saturday.

Saketh outclassed reigning National champion Niki Poonacha 5-0 in the third rubber to gain a four-point lead for the team which proved decisive in the eventual analysis.

Four-time National champion Prerna Bhambri was equally responsible in Radiant shining in the climax as she won both her mixed doubles matches, with Parv Nage and Arjun Uppal.

In a heady climax, Prerna and Arjun outplayed Dilip Mohanty and Sai Samhitha 5-1 when the teams were tied 17-17 after five rubbers.

In the league stage, Bangalore had crushed Team Radiant 28-14, but it was magical performance in the business end of the competition by Saketh, Prerna and company.

Aman Dahiya did give a strong start for Bangalore, which had fared consistently strong through the league, by beating Parv 5-.

But, Radiant recovered quickly as Prerna and Parv beat Aman and Sai Samhitha 5-2.

Saketh could have sealed the issue in the doubles but Suraj Prabodh blew hot and cold, as Niki and Paras Dahiya capitalised to win 5-3 for Bangalore.

Paras went on to beat a nervous Suraj 5-3 in the fifth rubber that led to a dream climax.

Arjun and Prerna stepped it up with their calm and calculated play, to trigger a joyous round of celebration for Team Radiant.

It was no wonder that the players of Team Radiant swept the best players awards in the various categories. Niki had the consolation of getting an award for his overall superb performance in the league.