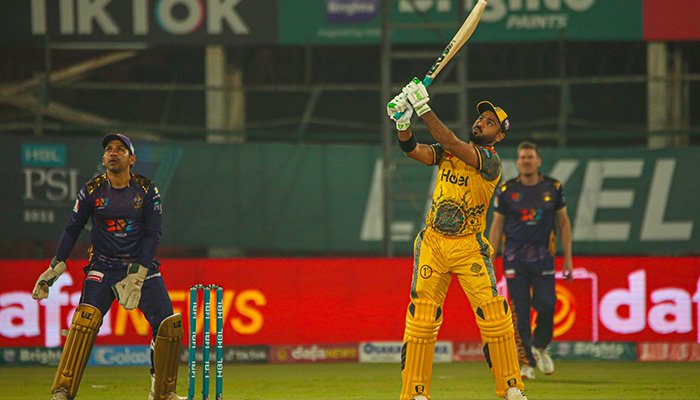 Experienced Shoaib Malik anchored Peshawar Zalmi to a five-wicket victory over Quetta Gladiators in a high-scoring opening game to the Pakistan Super League for both teams on Friday.

Malik led Peshawar from the front with an unbeaten 48 off 32 balls to lead a strong run-chase of 191-5 in 19.4 overs as regular skipper Wahab Riaz had to remain in isolation after testing positive for COVID-19. Left-handed Hussain Talat, traded to Peshawar this year from Islamabad United, top-scored with 52 off 29 deliveries and his partnership of 81 with stand-in skipper Malik in the middle-overs formed the nucleus of Peshawar’s chase.

Earlier, after being put in to bat, 20-year-old Englishman Will Smeed made a stunning PSL debut with a blistering knock of 97 off 62 balls in Quetta’s formidable total of 190-4.

Smeed and Ahsan Ali, who made 73, benefited from sloppy Peshawar fielding and put on 155 runs for the opening wicket stand. Smeed was dropped on 37 at short third man while substitute fielder Imam-ul-Haq grassed an easy catch at deep mid-wicket soon after Ahsan had completed his half century.

“I am lucky to be out there and I am happy that I have made the most of this opportunity,” Smeed said. “It is a wonderful chance for me to improve my game against the slower bowlers in conditions that are quite different than from where I come. I’ll take a lot of confidence from this knock going forward.”

Leg-spinner Usman Qadir (2-20) claimed both his wickets in the space of four balls when Ahsan was caught on the edge of the boundary by West Indian Sherfane Rutherford and Ben Duckett top-edged a reverse sweep in the 16th over.

Fast bowler Sameen Gul (2-41) also picked up the wickets of Iftikhar Ahmed (8) and denied Smeed his maiden T20 hundred off the last ball as the youngster holed out at deep mid-wicket while going for his century. But Smeed showed his powerful hitting — especially on the on-side — by clobbering 11 fours and four sixes.

Australian James Faulkner (1-40) brought Quetta back in the game when he had Talat caught in the deep in the 17th over which left Peshawar needing 32 off the last three overs.

But Malik settled the game when he smashed two sixes and a four in Faulkner’s next over as Peshawar started its campaign with a commanding victory.