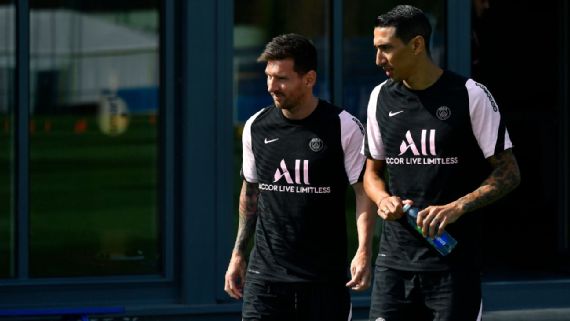 Di Maria, who has played alongside both Messi (for Argentina) and Ronaldo (at Real Madrid) added that it was ‘much better’ that PSG signed Messi over Ronaldo.

Picking Lionel Messi over Cristiano Ronaldo, Paris Saint-Germain’s Angel Di Maria said that he has “never seen” anyone like his teammate.

“Messi is from another planet. You throw a stone at him and he would control it, he beats a man like it is nothing, he thinks quicker than anyone. I have never seen anything like it.”

Di Maria, who has played alongside both Messi (for Argentina since the winger made his debut in 2008) and Ronaldo (at Real Madrid) added that it was “much better” that the Paris-based club signed Messi over Ronaldo.

“The quality and quantity that PSG have now is unique. It doesn’t happen often at a club and the best players always want to be with the best. For sure Cristiano would like to be here, but they brought Messi and luckily, that’s much better.”

Di Maria is optimistic that they can clinch the Champions League title, with the arrival of Messi, in a team that already has a number of stars.

“We always have the obligation to win the Champions League and now with the arrival of Messi we have to do it, come what may,” he said.

Bayern Munich Next Up For Erling Haaland In German Super Cup Showdown At Borussia Dortmund
Ligue 1: ‘After Eriksen, it gave us chills’ Bordeaux’s Samuel Kalu collapses on pitch