Protests outside, struggles inside: Man U loses to Liverpool 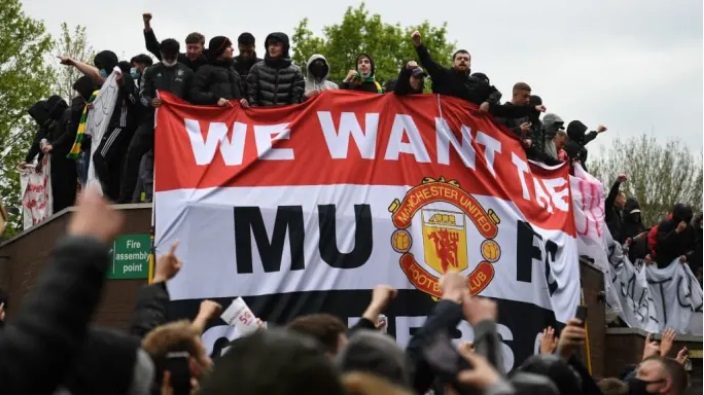 United might have wished it hadn’t, losing 4-2 for its first home defeat against its fiercest rival since Jürgen Klopp took charge of Liverpool six years ago after Diogo Jota scored twice.

The beefed-up defense outside Old Trafford was more robust than Manchester United’s on the pitch inside.

While United supporters again protested against the owning Glazer family — facing riot police and new steel barriers to guard the entrances — the game against Liverpool went ahead as planned after being called off 11 days earlier when some fans were able to storm the pitch.

United might have wished it hadn’t, losing 4-2 for its first home defeat against its fiercest rival since Jürgen Klopp took charge of Liverpool six years ago after Diogo Jota scored twice.

Not only was this United’s third game since Sunday — with this rearranged fixture squeezed into the week — but the players had to get to the stadium much earlier than usual after being unable to leave their hotel on May 2 due to the protests at Old Trafford.

“The players handled the situation well,” United manager Ole Gunnar Solskjaer said. “None of them have been complaining. They have got on with it. The preparations have been different. We’re not going to make an excuse of that.”

He also downplayed the sloppy defensive display, which was more demoralizing than impactful given United has a four-point cushion in second place with two games remaining.“Football would be really boring if no one made a mistake,” Solskjaer said. “You try to eradicate them and work on them.”

For Liverpool, which was playing its first game since its reign as champion was officially ended by Manchester City, the win means the reset target of just making the Champions League is still a possibility. With three games remaining, Liverpool is four points behind fourth-place Chelsea with a game in hand.

“I like the timing. we needed it tonight the most,” Klopp said of finally winning at United. “We always play to win we just didn’t see it often this season.”

While United is unbeaten on the road, this was a sixth loss of the Premier League season at a home that will have the fans back inside next week for the first time since before the pandemic in March 2020. Never before in the Premier League has United conceded as many as 27 home goals in a season.

It was a Liverpool defender, though, who helped United go ahead when Nat Phillips accidentally helped to divert the shot from Fernandes into the net.

“We started quite slow,” Philips said. “We knew, despite the things that were happening at the start, we had an extra gear. So I didn’t feel too worried.”

But from a corner, Mohamed Salah’s blocked shot was not cleared and a follow-up effort from Phillips was flicked in by Jota in the 34th minute.

“It was only a matter of time because we turned it around,” Philips said, “got ourselves together and started to play the way we should do.”And Liverpool entered halftime in the lead after Firmino rose above Paul Pogba to meet a free kick from Trent Alexander-Arnold.

“We conceded goals at very bad times of the games,” Solskjaer said. “Conceding before halftime was a kick in the teeth.”There was another one inside two minutes of the second half.

Fred was exposed playing out from the back and the errors continued with Luke Shaw dispossessed before Alexander-Arnold had a shot spilled by Dean Henderson and Firmino took advantage to score his eighth of the league campaign.

Just when United looked to be capitulating, Marcus Rashford pulled one back in the 68th minute. After initially passing to Edinson Cavani, Rashford made the run to receive the ball back and then slide a shot past goalkeeper Alisson Becker.

There would be no United comeback, though.Nemanja Matic gave the ball away in the 90th minute and Curtis Jones passed down the middle for Salah to run onto and then curl a low shot past Henderson.

“We have a very intense period now, we play the next three games in a week,” Klopp said. “West Brom, which is tough, Burnley with supporters and then Crystal Palace at home. Obviously we are looking forward to that, because our supporters are there but very intense. We have to recover quickly and go again.”

In Thursday’s other game, Everton moved into eighth place with a 0-0 draw at Aston Villa.