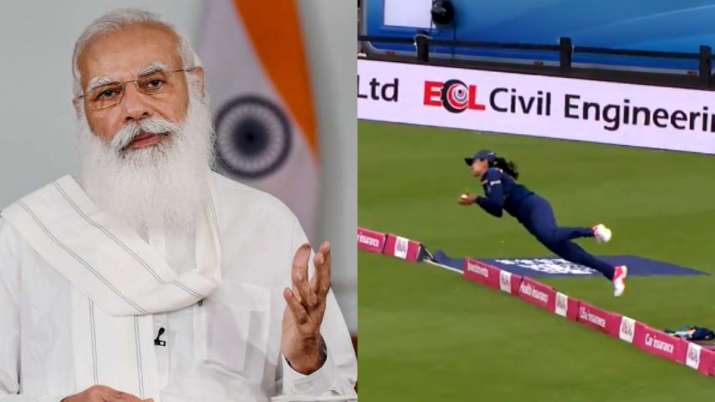 Harleen Deol’s jaw-dropping catch captured the imagination of sports fans around the globe with congratulatory messages pouring in on social media. Prime Minister Narendra Modi also took to Instagram Stories to praise the Indian cricketer’s spectacular effort, terming it “phenomenal”. Harleen Deol took the sensational catch in the opening Twenty20 International (T20I) between India Women and England Women at the County Ground in Northampton on Friday night (local time). While Harleen’s effort grabbed the headlines, hosts England won the match by 18 runs (DLS method) to take a 1-0 lead in the three-match series.

Stationed at the long-off boundary, the 23-year-old Indian stretched full length to grasp the ball but with the momentum taking her over the boundary ropes, she showed great presence of mind to throw the ball in the air, and then jump back into the field of play to complete the catch.

Harleen was quickly mobbed by her stunned teammates while England Women opener Danielle Wyatt too couldn’t stop herself from acknowledging the Indian’s effort.

A fantastic piece of fielding 👏

The match, however, didn’t go India’s way with rain having the final say on the matter.

Before the skies opened, Natalie Sciver (55 off 27 balls) and Amy Ellen Jones’ (43 off 27 balls) power-packed knocks helped the hosts post 177 for seven in their 20 overs

India, set a stiff 178-run target, had the worst possible start, losing young gun Shafali Verma on the second ball of the innings. Smriti Mandhana sparkled briefly but was dismissed by Sciver on 29.

Captain Harmanpreet Kaur failed to make her mark as well, dismissed for a paltry 1. When the rain gods came calling, India were 54 for three in 8.4 overs.

The match never resumed and England took the win on DLS method, taking a 1-0 series lead.

The second match of the series will be played at the County Ground in Hove later on Sunday.