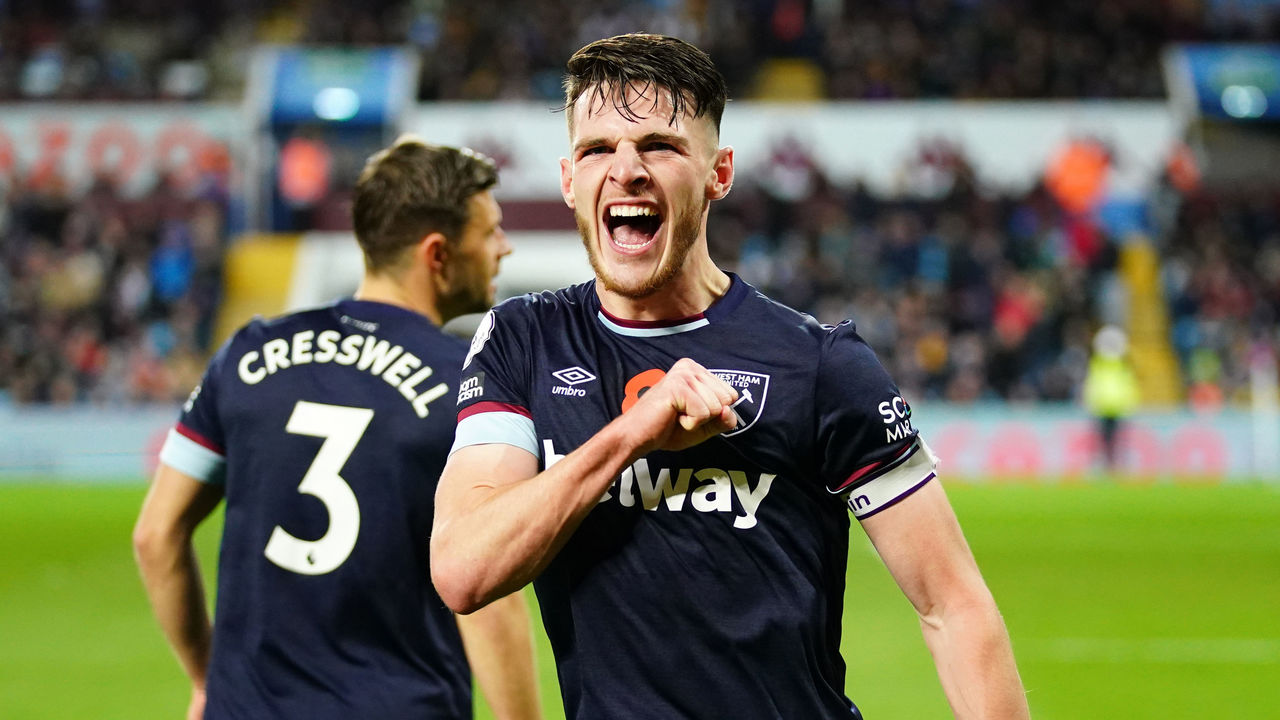 West Ham underlined their Premier League top-four credentials with a 4-1 win against 10-man Aston Villa on Sunday as they extended their impressive run on the road. Ben Johnson scored early for the visitors only to see Ollie Watkins equalise but the Hammers reclaimed the lead before half-time through Declan Rice. Villa’s task was made all the harder early in the second half when defender Ezri Konsa was dismissed for denying a goalscoring opportunity. Late goals from Pablo Fornals and Jarrod Bowen sealed the three points for David Moyes’ side and condemned Villa to a fourth straight Premier League defeat.

The victory lifts West Ham to 20 points after 10 games — level on points with third-placed Manchester City.

“It’s been a great week,” Moyes told Sky Sports after his team’s fifth consecutive away win in all competitions. “But you know what happens in football. It can turn around and bite you.

“We have another game on Thursday. I don’t want West Ham to become that flaky inconsistent team a lot of people remember them as.”

West Ham drew first blood in the seventh minute when Rice sprayed a pass out to the right flank for Johnson, who cut inside onto his left foot and curled a low shot into the far corner of the net.

But Villa’s delight was shortlived as Rice restored the visitors’ lead with a long-range shot that bobbled its way into the back of the net via a touch off the post just four minutes later.

Villa were reduced to 10 men in the 50th minute when a VAR review ruled that Konsa had denied Bowen a clear goalscoring opportunity by fouling him on the edge of the penalty area. The defender initially only received a yellow card for the foul.

Despite being a man down, the home side came agonisingly close to an equaliser when Lukasz Fabianski got his fingertips to a thumping Watkins header to push the ball against the bar.

West Ham increased their lead when Fornals finished from a tight angle after goalkeeper Emiliano Martinez could only push Bowen’s shot into his path and Bowen himself added a fourth.

Earlier, Leeds beat Norwich 2-1 to record just their second league win of the season and climb out of the relegation zone.

The sides were locked at 0-0 at Carrow Road at half-time but the game exploded into life in a dramatic four-minute spell after the break.

Leeds forward Raphinha broke the deadlock in the 56th minute only for Andrew Omobamidele to head an equaliser from a corner two minutes later.

But home cheers turned to despair in the 60th minute when Rodrigo’s low left-footed effort found its way underneath goalkeeper Tim Krul.

The win lifted Leeds to 17th in the table, three points clear of the bottom three but Norwich remain winless and are eight points from safety.