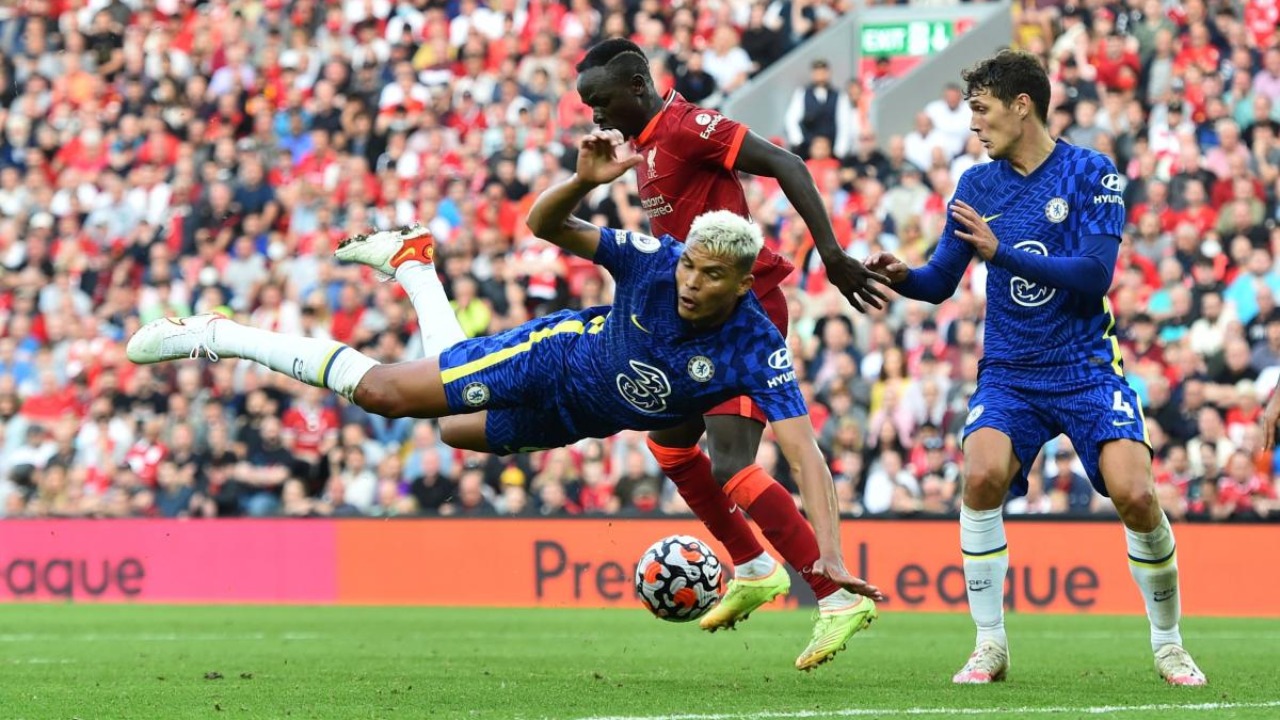 Chelsea held out with 10 men for the entire second-half to frustrate Liverpool as the first heavyweight clash of the Premier League season between two title contenders ended 1-1 at Anfield on Saturday. Kai Havertz’s looping header put the visitors in front before Reece James was sent-off in first-half stoppage time for handball on his own goal line and Mohamed Salah converted the resulting penalty. But Jurgen Klopp’s men failed to make their man advantage count in the second-half as the European champions showed resilience to dig out a precious point that strengthened their title credentials.

Both sides and Manchester United, with Cristiano Ronaldo back at Old Trafford, are expected to pose Manchester City a much tougher challenge to retain the Premier League this season.

And the first meeting between those four sides of the campaign did not disappoint with a raucous Anfield atmosphere the accompaniment to 90 minutes of high drama.

Liverpool’s title defence was knocked off course by a series of long-term injuries to key players last season.

However, with Virgil van Dijk and Joel Matip restored in central defence, allowing Jordan Henderson and Fabinho to play their more familiar midfield roles, the Reds’ blend of intense pressing and counter-attacking was back to its best early on.

Klopp made the bold call to give 18-year-old Harvey Elliott just his second Premier League start with Thiago Alcantara left on the bench.

Elliott fired the first shot inches wide before Henderson then missed a glorious chance to open the scoring when he volleyed wide on his weaker left foot from Trent Alexander-Arnold’s inch-perfect cross.

Chelsea had barely threatened until they hit the hosts with a sucker punch on 22 minutes when Havertz’s header brilliantly guided James’s corner into the far corner.

The Blues then could have put the game beyond Liverpool before the game-changing incident at the end of the first-half.

Romelu Lukaku announced his return to English football by scoring on his second Chelsea debut in a routine 2-0 win at Arsenal last weekend.

The Belgian struggled when up against Van Dijk, but got the better of Matip to send Mason Mount through on goal and the England midfielder’s shot flashed across goal.

Elliott skied another glorious chance well over at the other end, but Liverpool were struggling to pick holes in the Chelsea back five until a corner deep into first-half stoppage time.

Matip’s header came back off the crossbar and in the goalmouth scramble that ensued James stopped Sadio Mane’s effort crossing the line with his hand.

There seemed little intent from the England international, but once referee Anthony Taylor awarded the penalty following a VAR review, he had little option but to send him off for denying a clear goalscoring opportunity.

Chelsea players were furious at the decision with Edouard Mendy and Antonio Rudiger booked even before they surrounded Taylor at half-time.

Thomas Tuchel had to deal with another blow at the break as N’Golo Kante was forced off with a knock he picked up in the first-half.

Tuchel also sent on Thiago Silva for his first appearance of the season for Havertz to shore up his defence ahead of the expected Liverpool siege.

But the home side were largely restricted to efforts from long range as Van Dijk, Fabinho and Robertson tested Mendy, while Henderson curled a shot inches wide.

Chelsea could even have stolen all three points late on when Alisson Becker made a meal of stopping Mateo Kovacic’s strike on the break.

Salah had one last chance for a winner at the other end but never looked comfortable on his right foot as his weak shot was easily gathered by Mendy.