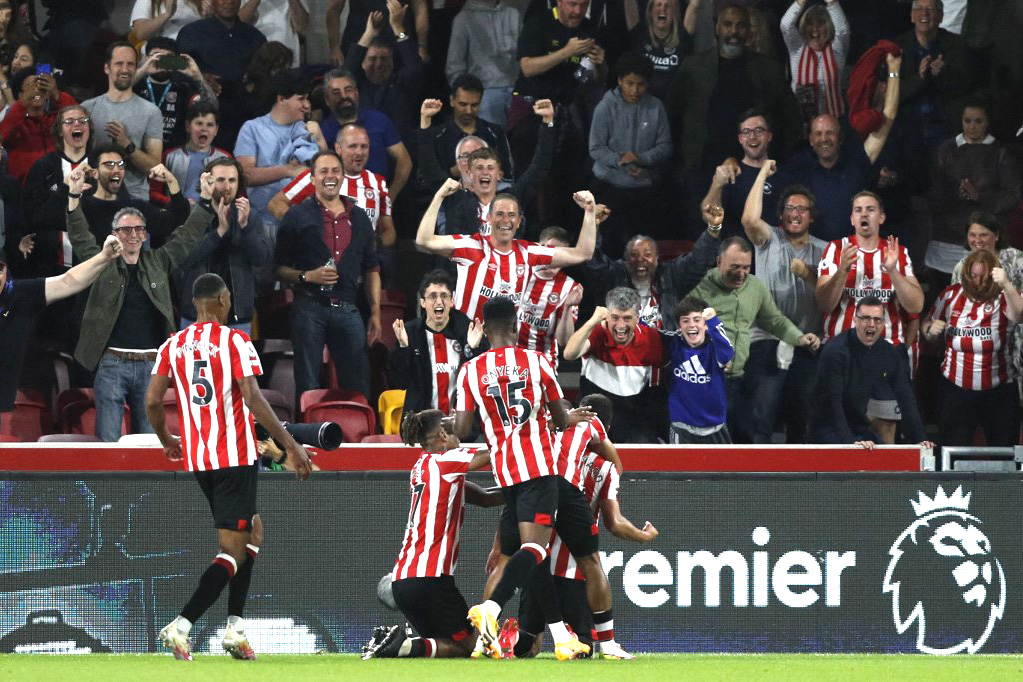 Brentford made a blistering start to their first English top-flight season for 74 years as goals from Sergi Canos and Christian Norgaard earned a 2-0 win over Arsenal in front of a first-ever full house at the Brentford Community Stadium on Friday. The Bees spent the first season at their new home playing behind closed doors, but rose to the occasion as they were roared on by 17,000 fans in the first Premier League match at full capacity since March 2020. “What an atmosphere,” said Brentford manager Thomas Frank. “The first time in the top-flight, we are opening the Premier League season and for our own fans, they can dream. We are top of the league.

“We are going to celebrate every win, but we want more.”

By contrast, Arsenal boss Mikel Arteta is already under pressure.

The Gunners have finished eighth in each of his first two seasons in charge and the Spaniard has a daunting task to turn things around before the September international break with title favourites Chelsea and Manchester City to come in Arsenal’s next two games.

“I don’t think we deserved anything different,” said Arteta in a damming indictment of his side.

Frank whipped up the crowd into a frenzy before kick-off and Arsenal were soon suffering under the relentless pressing his side became famous for in the Championship.

Bryan Mbuemo drilled a shot off the outside of the post in the first warning shot from the home side before they took the lead on 22 minutes.

Ethan Pinnock fed Canos on the Brentford left and he cut inside to unleash a powerful shot that beat Bernd Leno at his near post.

The Gunners were without both Pierre-Emerick Aubameyang and Alexandra Lacazette due to illness, handing Folarin Balogun his Premier League debut.

Balogun made little impact, but was also unfortunate not to win a penalty as he was caught on the follow through after slicing wide just before half-time.

“A lot of young boys were doing everything they can. For some of them it was the first experience in the league – that says a lot,” added Arteta, as he appeared to make a plea for more funds before the end of the transfer window.

“What I can control and help, I’ll put all my enthusiasm and work into that.”

Bukayo Saka was then given a standing ovation by both sets of fans when he was introduced on the hour mark after the racial abuse he suffered in the aftermath of missing the decisive penalty in England’s Euro 2020 final defeat to Italy.

But Brentford’s players were in no mood to show any mercy and substitute Norgaard made sure of a famous night 17 minutes from time.

Arsenal somehow let a long throw bounce inside their six-yard box and the Danish international gratefully headed into an unguarded net to double Brentford’s advantage.

Smith-Rowe and Tierney were the only sources of comfort for Arsenal as they combined to set up Nicolas Pepe, who was denied by a stunning save by Raya five minutes from time.

But a clean sheet rounded off a famous win for Brentford as they ended their first night in the Premier League on top of the table.