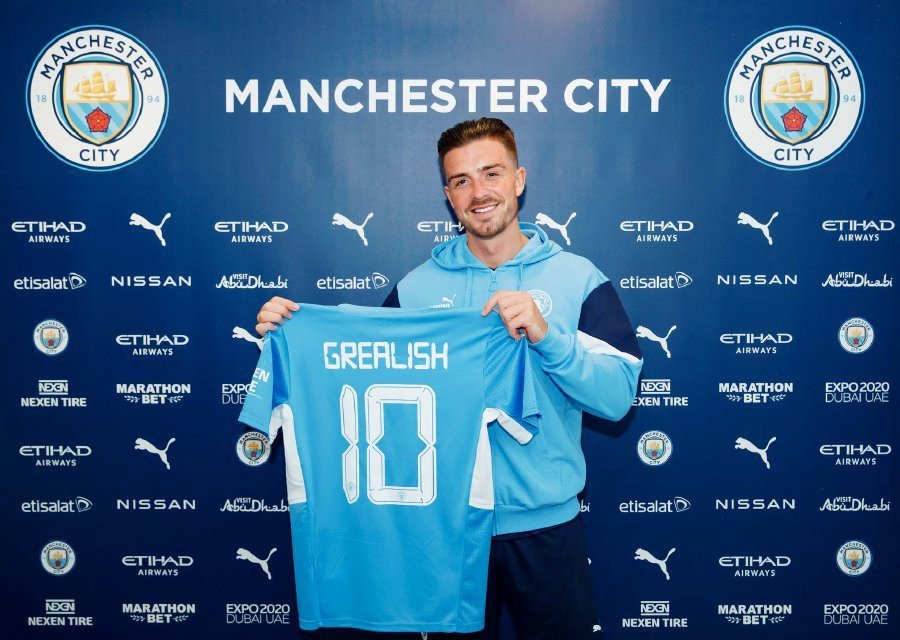 Manchester: Manchester City on Thursday announced the signing of “natural talent” Jack Grealish on a six-year deal from Aston Villa for a British record fee reported to be £100 million ($139 million).

City confirmed Grealish will wear the number 10 shirt, which was recently vacated by the departure to Barcelona of striker Sergio Aguero.

“I am incredibly happy to have joined Manchester City. City are the best team in the country with a manager considered to be the best in the world – it’s a dream come true to be part of this club,” Grealish, 25, said on Man City website.

The fee shattered the previous British record of £89 million paid by Manchester United to sign Paul Pogba from Juventus in 2016.

“Over the past 10 seasons, City have won major trophies consistently. Pep Guardiola coming here has taken them to the next level and the football this team plays is the most exciting in Europe.

“To play for Pep and learn from him is going to be special and it’s something any top footballer would want.

“The facilities are amazing, and I honestly can’t wait to get started, meet everyone and get playing.”

City are reported to have activated a clause in Grealish’s contract that compelled Villa to accept their offer when it reached £100 million.

Grealish returned from holiday in Dubrovnik at the start of this week and resumed training while City hammered out the deal.

Having graduated from Villa’s youth academy, Grealish has spent his entire career at the club he supported as a boy, apart from a loan spell at Notts County in the 2013-14 season.

Grealish, who had four years remaining on his Villa contract, scored six times in the league last season and provided 10 assists.

He has never played in the Champions League and joining City gives him a chance to showcase his talents at the highest level.

The Villa captain’s four appearances for England during their run to the Euro 2020 final last month gave a glimpse of the quality that convinced City manager Pep Guardiola to make his move.

The deal is a major statement of intent by City ahead of the new season.

Grealish’s ability to prise open defences will give Guardiola another weapon as City look to defend the Premier League title.

City face Leicester in the Community Shield at Wembley on Saturday before starting their Premier League campaign against Tottenham on August 15.

“Jack’s development over the past few seasons both for club and country has been plain for everybody to see. His natural talent together with his commitment to improve as a player, has seen him become one of the most exciting attacking players in world football today.

“I am certain that the fans are going to love seeing him in our team. Pep loves the way he plays, and we all feel he is an ideal fit for Manchester City.”

“Our style and his style are a perfect match. I’m excited to watch him over the coming years.”

Grealish admitted it was not an easy decision to leave his boyhood club in Birmingham.

“It was obviously a difficult few months because I have been an Aston Villa fan for my whole life,” he added.

“But when I spoke to the manager here and you see what type of players they have got here, in the end it was something I couldn’t say no to. I am absolutely delighted to be here.”