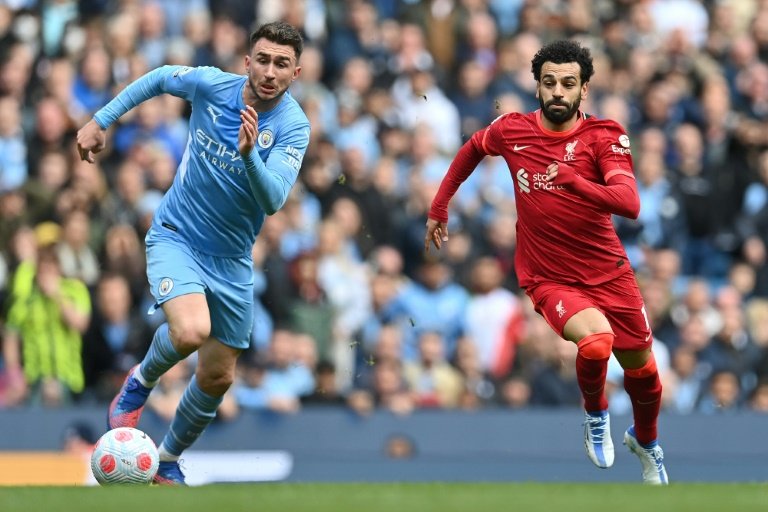 Manchester: Pep Guardiola is demanding perfection from his Manchester City side to keep Liverpool at bay after a pulsating match between the Premier League title challengers finished all square.

Sunday’s 2-2 draw at the Etihad between the two outstanding sides of the current era was billed as a potential title decider even though each have seven matches still to play.

The expectant crowd was treated to a feast of attacking football in Manchester but at the end of it nothing much had changed.

Defending champions City remain just one point ahead of their rivals, who were 14 points off the pace in January.

City were twice pegged back after goals from Kevin De Bruyne and Gabriel Jesus were cancelled out by Diogo Jota and Sadio Mane.

Guardiola’s men were the better side in the first half, putting Liverpool’s defence under intense pressure, but the visitors were revitalised after the break.

The City boss said he had a nagging feeling that his side had let Liverpool off the hook when they were on top — they could even have won the match in the dying seconds but Riyad Mahrez lifted his shot over the bar.

“It was a fantastic game from both sides and both sides try to win every game in all competitions,” he said. “I had the feeling that with this result we missed an opportunity, a feeling we leave them alive.”

Although the draw suits City more than Liverpool, Guardiola said his team would have to win all seven of their remaining games to be crowned Premier League winners.

“We know that right now that one game dropped we will not be champion,” he said.

City, chasing a fourth Premier League title in five years, appear to have the easier run-in, with Liverpool still to face Manchester United, Everton and Tottenham.

But Klopp’s team have shown that — City apart — they are a cut above the rest of the teams in the league, as shown by their 10-match winning run before Sunday’s game.

“Nothing’s changed really,” said the Liverpool boss. “So you play 95 minutes of incredibly intense football and you are as smart as before but that’s actually pretty good news.”

The German compared the two teams to heavyweight boxers.

“The moment you put your arms down you get such a knock in the middle of your face and then you have to get up again and you have to try to get control again.”

Klopp agreed with Guardiola’s assessment that nothing short of perfection would do if his side were to stand any chance of winning a record-equalling 20th English top-flight title.

“We have to be pretty much as close to perfection as possible to win every game,” he said. “This is absolutely insane but that’s obviously the only way to beat this team.”

City and Liverpool have been involved in some epic battles in recent seasons, in particular in 2018/19 when City pipped their rivals to the title by a single point.

And fans will not have long to wait until the next instalment, with the two teams locking horns again on Saturday in the FA Cup semi-final.

This time they know there cannot be a draw, with Liverpool’s bid for an unprecedented quadruple and City’s treble chase on the line.

Even after Wembley there is a chance for one more encounter between the two heavyweights this season — in the Champions League final.

For many, such a match-up would merely confirm what we already know — they are the best two sides not only in England but also in Europe.