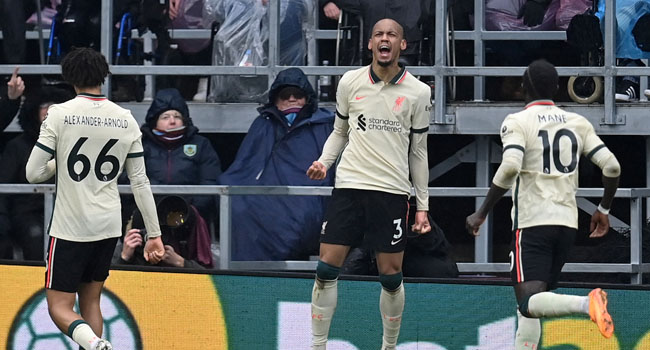 Liverpool kept the pressure on Premier League leaders Manchester City as Fabinho sealed a 1-0 win over Burnley, while Tottenham’s top four bid suffered a fresh blow in a 2-0 loss to Wolves on Sunday.

Fabinho struck late in the first half at windswept Turf Moor to give Liverpool their fourth successive league victory.

Liverpool are nine points behind City with one game in hand as the Reds refuse to let the title race become a prolonged coronation for Pep Guardiola’s men.

City made it 14 wins from their last 15 league games on Saturday as Raheem Sterling’s hat-trick inspired a 4-0 win at lowly Norwich.

But Guardiola is convinced Liverpool will push the champions all the way to the finish line and the way they ground out a hard-fought success against bottom of the table Burnley suggests he is right not to count them out.

“It is nine points and then it is 12 points because most of the time City play before us. These are really difficult games. That is why we don’t think about the title race,” Reds boss Jurgen Klopp said.

After a shaky start, during which Burnley threatened a shock opener, Fabinho restored order five minutes before half-time.

The Brazilian poked home a fifth goal in his last seven games after Mane headed on Trent Alexander-Arnold’s corner.

“A perfect afternoon. Raining and windy,” Klopp said. “Everything today was set up to be a banana skin for us. We played the circumstances rather than suffered from them.”

Antonio Conte’s side, loudly booed off at full-time, dropped to eighth place, five points adrift of the Champions League places.

“We created chances but in the end we are talking about another defeat. We have to work and to know it won’t be easy for us. It’s difficult to explain the way we started,” Conte said.

In the 18th minute, Lloris was involved again with a woeful pass to Ben Davies, prompting the startled defender to gift possession to Wolves.

Daniel Podence’s shot was deflected onto the post by Davinson Sanchez and Dendoncker bundled in from close-range.

Wolves, who climbed one point above Tottenham into seventh, have won four successive top-flight away games for the first time since 1980.

Zouma was fined two weeks’ wages by West Ham after a video emerged showing the French defender kicking and slapping his cat.

Despite criticism of his stance, Hammers boss David Moyes had selected Zouma for a second successive game since the incident, only for the 27-year-old to pull out when he felt sick during the warm-up.

Youri Tielemans equalised with a penalty just before half-time after Aaron Cresswell’s handball.

Ricardo Pereira headed Leicester in front after 57 minutes but, in stoppage-time, Dawson deflected Bowen’s corner into the net via his upper arm, with the goal surviving a VAR review for handball.

“He was ill before the game, wanted to play, we wanted him to play as well. Once he got out he did not think it was possible,” Moyes said of Zouma.

The Magpies, winners of three consecutive league matches for the first time since 2018, are four points above the relegation zone.

Trippier smashed his free-kick past Emiliano Martinez in the 35th minute for his second set-piece goal in successive games.