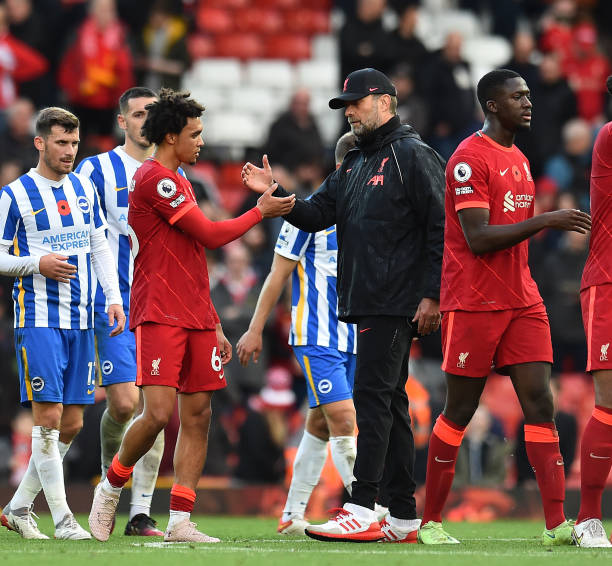 Liverpool: Jurgen Klopp criticised the way Liverpool responded to squandering a two-goal lead as Brighton claimed a 2-2 draw at Anfield on Saturday.

Jordan Henderson and Sadio Mane had put the Reds 2-0 in front after 24 minutes but Graham Potter’s team fought back with goals from Enock Mwepu and Leandro Trossard either side of half-time.

It was just the sixth time Liverpool failed to win a Premier League home game after leading by two goals.

Yves Bissouma hit the post and Trossard had a late goal disallowed for offside as the Seagulls threatened to complete a remarkable comeback win.

“In the second half, we were not good enough. The body language I didn’t like it all,” the German said.

“It was like, ‘Oh my God, it’s really tough’. Yeah, it was clear before the game.

“The best way to defend Brighton is to have the ball and play in the spaces where they are exposed, but we didn’t do that and that’s a problem.”

Mane and Mohamed Salah had goals ruled out for handball and offside respectively as Liverpool dominated but failed to blow Brighton away in the first half.

Klopp’s side remain second but missed the chance to keep pace with leaders Chelsea, who moved three points clear following their 3-0 win at Newcastle and Manchester City’s shock 2-0 defeat to Crystal Palace.

“It feels like a defeat, not only because we were 2-0 up and didn’t win. It’s because we scored two of the most beautiful goals I’ve ever seen us score, which were disallowed,” added Klopp.

Liverpool host Atletico Madrid in the Champions League on Wednesday before visiting fourth-placed West Ham in the Premier League next weekend.