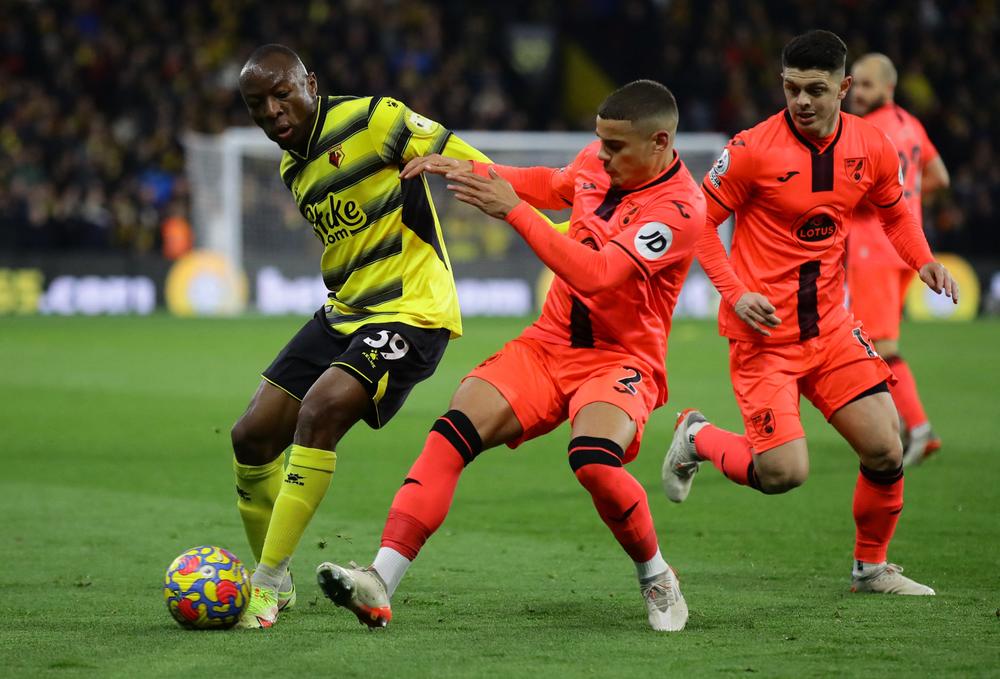 Watford drop into the bottom three as a ninth consecutive game without a win piled the pressure on manager Claudio Ranieri.

Sargent had not scored a league goal since his August move from Werder Bremen, but came good at a vital time for the Canaries bid to beat the drop.

“To get your first one and then your second after that was pretty crazy,” said Sargent. “It’s a big game for us so a great night overall.

“Every game is big for us, but to get a win against the team right in front of us is a huge win.”

The American’s audacious flick with the outside of his boot crept in off the underside of the bar to open the scoring six minutes into the second half.

Play was then held up due to a floodlight failure, but it was the visitors who sparkled when the game resumed.

Watford were then dealt another huge blow when top scorer Emmanuel Dennis was sent-off for a second bookable offence.

The Nigerian had been lucky to escape a straight red when picking up his first yellow card for a high challenge on Pierre Lees-Melou and could have no complaints after another mistimed lunge on Max Aarons.

Dennis will miss another huge clash in the battle to beat the drop against Burnley on February 5.

A Juraj Kucka own goal in the second minute of 15 added for the rubbed salt into the Hornets’ wounds.

Norwich move two points clear of the relegation zone, but all the bottom three have games in hand.

Newcastle and Watford have played two fewer games than Dean Smith’s men, while Burnley have five extra matches to close the five-point gap.

However, given Watford’s ruthless streak when it comes to sacking managers, Ranieri may not be given the chance to right his side’s slide in recent weeks.

Xisco Munoz was dismissed in October despite taking seven points from the first seven games of the campaign and leading Watford to promotion last season.

Ranieri has added just seven more in the last 13, only one of which has come since thrashing Manchester United 4-1 in November.

“I speak every day with the board and we are together,” said Ranieri.