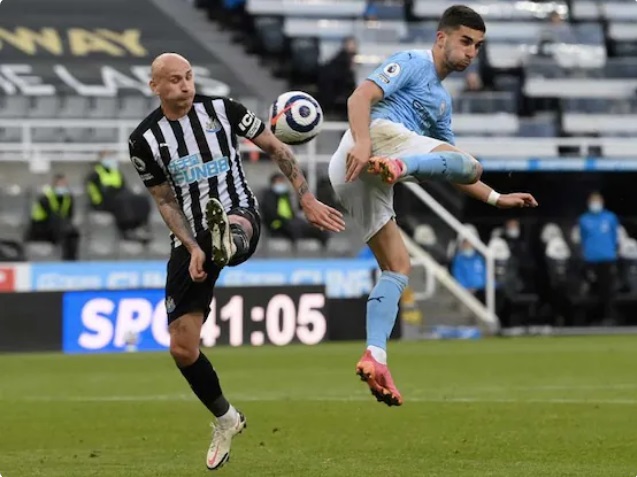 Ferran Torres scored his first Manchester City hat-trick as the newly-crowned English champions twice came from behind to beat Newcastle 4-3 on Saturday. With a third Premier League title in four years sealed with three games to spare, Pep Guardiola again took the chance to hand a number of his fringe players an opportunity to shine two weeks ahead of the Champions League final. Goalkeeper Scott Carson was handed his City debut at 35 and a first Premier League appearance for almost 10 years.

But it was Torres who made the strongest case to be involved against Chelsea in Porto on May 29 with a trio of fine finishes.

Victory opens up City’s unassailable lead at the top of the table to 13 points over Manchester United. Newcastle secured safety in the top-flight last weekend and remain in 16th.

Newcastle were unfortunate not to extend their lead 10 minutes later when Shelvey curled a free-kick over the wall and saw it come back off the crossbar with Carson beaten.

The Magpies levelled again in first-half stoppage time when Nathan Ake was adjudged to have tripped Joelinton and after a VAR review, referee Kevin Friend pointed to the spot.The Brazilian striker stepped up to smash the spot-kick past Carson and make it 2-2 at the break.

Three of the City back four also started a 5-2 home defeat to Leicester in their first home game of the season when they conceded three penalties.

A friend pointed to the spot for a second time just after the hour mark when Kyle Walker tripped Joe Willock inside the box. Carson was unfortunate as he saved the midfielder’s spot-kick, but the rebound fell kindly for Willock to slot home the sixth goal of his spell on loan from Arsenal. However, the lead last just seconds when Torres stabbed home Gabriel Jesus’ driven cross to make it 3-3.

The Spaniard completed his hat-trick 24 minutes from time with another nimble finish after Cancelo’s curling effort came back off the post.

Indian Football Team To Leave For Qatar On May 19 For World Cup Qualifiers
UEFA Women’s Champions League final: For Barcelona’s Asisat Oshoala, repeating mistakes from 2019 is not an option