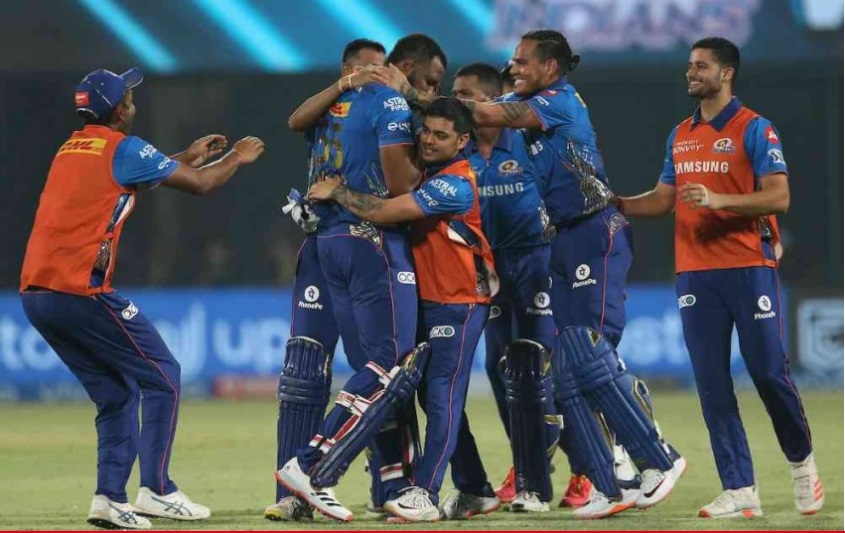 It was Power Play by Kieron Pollard. The big man freed his arms and the ball took flight. In this heavyweight contest, he delivered the knock-out blow. It was a brutal onslaught.

In one of IPL’s greatest innings, Pollard, 87 n.o. off 34 balls with six fours and eight sixes, fired Mumbai Indians, chasing a mammoth 219, to a heart-stopping last-ball four-wicket win over Chennai Super Kings their clash at New Delhi’s Arun Jaitley Stadium on Saturday.

After several twists, the contest boiled down to 16 off the last over. After a dot ball, Pollard flicked Lungi Ngidi to the fence. The third ball was swung to the fence but the fourth was a dot. The fifth was sent flat over square-leg for a six and a hectic brace off the last ball settled the issue. Mumbai had pulled off an incredible win.

As tension mounted, Faf du Plessis put down Pollard – on 68 – at long-on off Shardul Thakur. The heavy-hitting Pollard had earlier waded into Ravindra Jadeja with some rousing hitting; three sixes in an over. He also ruthlessly dismissed Lungi Ngidi for two on-side sixes while Thakur was bludgeoned for a straight six. The West Indian zoomed to 50 off just 17 deliveries.

Sam Curran struck for CSK, trapping Krunal Pandya leg-before with a yorker. The combative Curran sent down an excellent 17th over, conceding just two runs. Hardik Pandya, however, whipped two successive sixes of Curran in the 19th before falling to the left arm.

Earlier, Rohit Sharma and Quinton de Kock gave their side a brisk start. Thakur struck for CSK after Dhoni bowled out Deepak Chahar, who was struggling with cramps. Rohit was held at sweeper cover. Then Jadeja had Suryakumar Yadav caught behind by one that held its line. And Moeen Ali consumed de Kock. In CSK’s innings, Ambati Rayudu’s captivating 72 not out off 27 balls was a compelling blitzkrieg. Rousing straight sixes pull over mid-wicket, scorching shots through covers after Rayudu made room were the gems that studded his innings. Moeen delighted after Ruturaj got a leading edge to Trent Boult. His 58 was an innings with nonchalant pick-up shots, searing straight drives, glorious cover drives, and dismissive pulls. du Plessis played his part, twice pulling Bumrah for the maximum. The wily Pollard struck with his medium pace, sending back du Plessis – falling to a ramp shot – and Suresh Raina, in his 200th IPL game, held at mid-wicket to trigger a mini-collapse.

As the night wore on, Pollard threw in the killer blow.