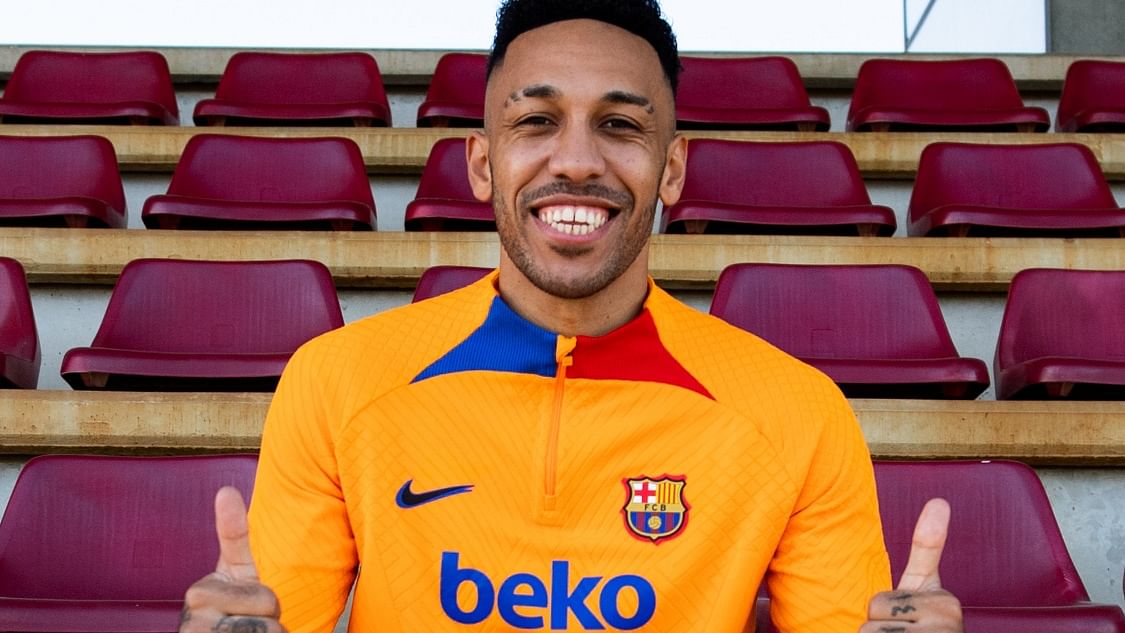 Barcelona: Barcelona finally confirmed the signing of Pierre-Emerick Aubameyang on Wednesday, handing the 32-year-old a contract until 2025 but with a break clause after 18 months.

Aubameyang was able to join Barca on a free transfer, in the most dramatic deal of the transfer window, after Arsenal terminated their former captain’s contract.

The break clause can be activated in June 2023, Barca confirmed, when his Arsenal contract had been due to expire.

Aubameyang has also taken a significant cut on his Arsenal salary to complete the move although it is likely his terms will improve after this season, when Barcelona’s salary limit is due to increase.

“The player will sign a contract until 30 June 2025 with an option to agree departure on 30 June 2023 and his buy out clause will be set at 100 million euros,” a Barcelona statement read.

Aubameyang’s surprise move brings an end to an increasingly embittered spell at Arsenal, who will be relieved to be rid of his wages, which reportedly started at 300,000 euros ($337,000) a week.

Barcelona, meanwhile, will believe one of the world’s deadliest finishers in his prime can now fire them into La Liga’s top four, with Champions League qualification essential to the club’s hopes of financial recovery.

Barcelona are “one of the biggest clubs in the world and that is why I have signed for Barca”, he said.

“It was a very long day, but in the end I’m here, I’m looking forward to it and I’m very happy.”

French-born Aubameyang is, like his father Pierre, a Gabon international. His mother was born near Madrid before moving to France as a child.

“I’m very proud especially because my family is Spanish by my mother’s side,” said Aubameyang.

The move gives him the set of the five major European leagues, although he never played in Serie A for AC Milan, where he began his career and starred for the youth team.

“I have experience, I played in Germany, in France, in England, so I’m here to help and give the maximum for the team.”

– ‘Disciplinary breach’ –
It was a spectacular way for Barcelona to end an active transfer window.

They have been busy despite their enormous debts and their inability to either sign talented French World Cup winning striker Ousmane Dembele to a contract extension or to sell him before he becomes a free agent in the summer.

Barcelona have struggled to fill the hole Lionel Messi left when he departed in the summer. With Dembele out of favour, Ansu Fati injured and Memphis Depay and Luuk de Jong struggling, the club were desperate to add punch in attack.

Aubameyang’s arrival follows Spain winger Ferran Torres, bought at the end of December for 55 million euros from Manchester City, and the return of both club legend Dani Alves at 38 and Spanish winger Adama Traore, on loan from Wolves.

They sit fifth in La Liga, a point behind Atletico Madrid, who they play at home on Sunday, when Aubameyang could make his debut.

Aubameyang, who was named African Footballer of the Year in 2015, was recruited by Arsenal on the last day of the 2018 January transfer window for a reported 56 million pounds, a club record at the time.

In almost exactly four years at the club, he appeared in 165 competitive games and scored 92 goals.

But his form dipped rapidly after he signed a three-year contract that reportedly made him the Premier League’s highest earner at the time in September 2020.

The striker’s indiscipline and chronic lack of punctuality caused problems at Arsenal as they had at Dortmund.

In December he was stripped of the captaincy for what Arsenal described as “his latest disciplinary breach”.

“I have always been 100% focused and committed on doing everything I can for this club which is why leaving without a real goodbye hurts – but that is football,” Aubameyang wrote to Arsenal fans on Instagram after he was released on Tuesday.

In January, Aubameyang was part of the Gabon squad at the Africa Cup of Nations in Cameroon but missed the first two games with coronavirus before being sent home after team medical staff said they had detected “cardiac lesions”.