Pele To Stay In Hospital Due To Urinary Tract Infection 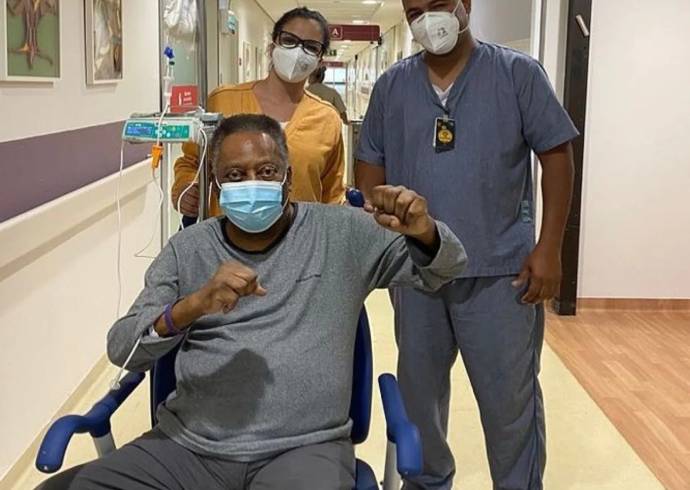 Brazilian football great Pele will remain hospitalised for a urinary tract infection in a Sao Paulo hospital, where he was already receiving chemotherapy for a colon tumor, the facility said Monday. The 81-year-old ex-player known as “O Rei” (The King) was initially admitted to the Albert Einstein hospital in Sao Paulo on February 13 to continue his treatment for a colon tumor detected in September. He has remained hospitalized since then. Eight days after being admitted, the hospital said it had detected a urinary tract infection during routine exams, which would extend Pele’s stay.

“Clinical conditions are stable, and hospital discharge should occur in the next few days,” the hospital said in a statement Monday.

Pele underwent surgery for the tumor on September 4, spending a month in the hospital before being discharged to continue chemotherapy.

It is the latest in a string of health troubles for the aging star, whose public appearances have grown increasingly rare.

Considered by many the greatest footballer of all time, Edson Arantes do Nascimento — Pele’s real name — is the only player in history to win three World Cups (1958, 1962 and 1970).

He burst onto the global stage at just 17 by scoring dazzling goals, including two in the final against hosts Sweden, as Brazil won the World Cup for the first time in 1958.

He went on to have one of the most storied careers in sport, scoring more than 1,000 goals before retiring in 1977.

“As I have been doing monthly, I am going to the hospital to continue my treatment,” Pele said on his social media platforms on February 13.

Ajax agree 7.85 million euros compensation for Abdelhak Nouri
Watch: Women’s Footballer Scores Hat-Trick Of Own Goals In First Half Of The Match