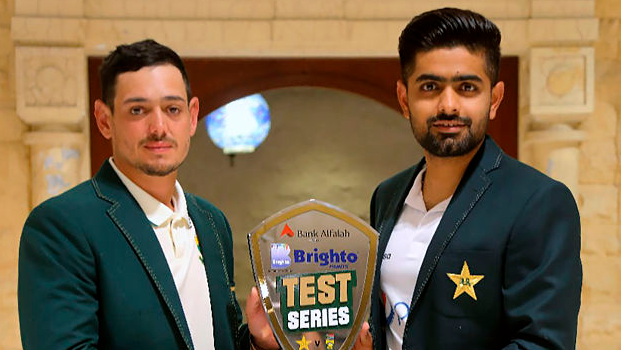 The team, led by wicketkeeper-batsman Quinton de Kock , was whisked from the airport under state-head level security accorded by the hosts, the Pakistan Cricket Board (PCB), A deadly attack on Sri Lanka’s team in 2009 froze international tours to Pakistan before their gradual resumption in recent years.

Day 1, report: Fast bowler Rabada took two wickets for just eight runs as he led a South African fight back against Pakistan in their first Test in Karachi Tuesday.

Pakistan was in trouble at 33 for four at the close of play, having bowled out the visitors for 220 — their second-lowest total in the country. Fourteen wickets fell on the brownish National Stadium pitch, which had been expected to take spin from day one.

South Africa were well placed at 108-2 soon after lunch, but lost their last eight wickets for just 112 runs — barely managing to overhaul their lowest total in Pakistan, the 214 made at Faisalabad in 1997.

Day 2, report : South Africa put down a couple of difficult chances , but the bowling overall didn’t seem all that threatening , it’ll take a big effort with the bat now. But first they have to ensure these last two wickets don’t hurt them too much.