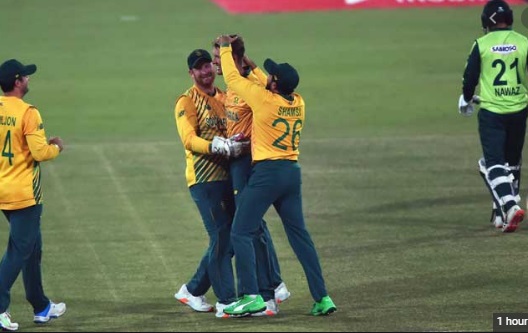 South Africa beat Pakistan by six wickets on Saturday in the second T20I at the Gaddafi Stadium in Lahore. South Africa thus levelled the three-match series at 1-1.

Pite van Biljon and Reeza Hendricks both scored 42 as South Africa chased down a modest 145-run target in just 16.2 overs. Fast bowler Dwaine Pretorius took 5-17 as Pakistan — sent in to bat — made 144-7 with wicketkeeper-batsman Mohammad Rizwan scoring 51. Pakistan won the first match by three runs on Thursday. The third and final match is on Sunday, also in Lahore.

They laid the groundwork for victory after choosing to field for the second successive match and restricting Pakistan to a below-par total, thanks to an outstanding performance by Dwaine Pretorius. He claimed the best figures for South Africa in T20I cricket with 5 for 17, beating Ryan McLaren’s 5 for 19. South Africa beats Pakistan by six wickets to level series- South Africa broke a losing streak that stretched back five T20Is to last February and stayed alive in the ongoing series in Pakistan by successfully chasing 145 in foggy conditions in Lahore.

Mohammad Rizwan top-scored for Pakistan with a 41-ball 51 laced with six boundaries and a six while Faheem Ashraf hit two boundaries and as many sixes in his 12-ball 30 not out.

Pakistan’s lanky paceman Shaheen Shah Afridi gave his team an ideal start by dismissing Janneman Malan with the second ball of the innings and Jon-Jon Smuts in the following over, finishing with 2-18 in three overs.

“I am happy that I have contributed to the victory,” said Pretorius. “We had a plan in bowling and we executed them well for this nice win.”

The series decider will also be in Lahore on Sunday.

“It will be a big night on Sunday and I hope that we can pull off a series win,” said Klaasen.

PAK vs SA Head to Head in T20Is