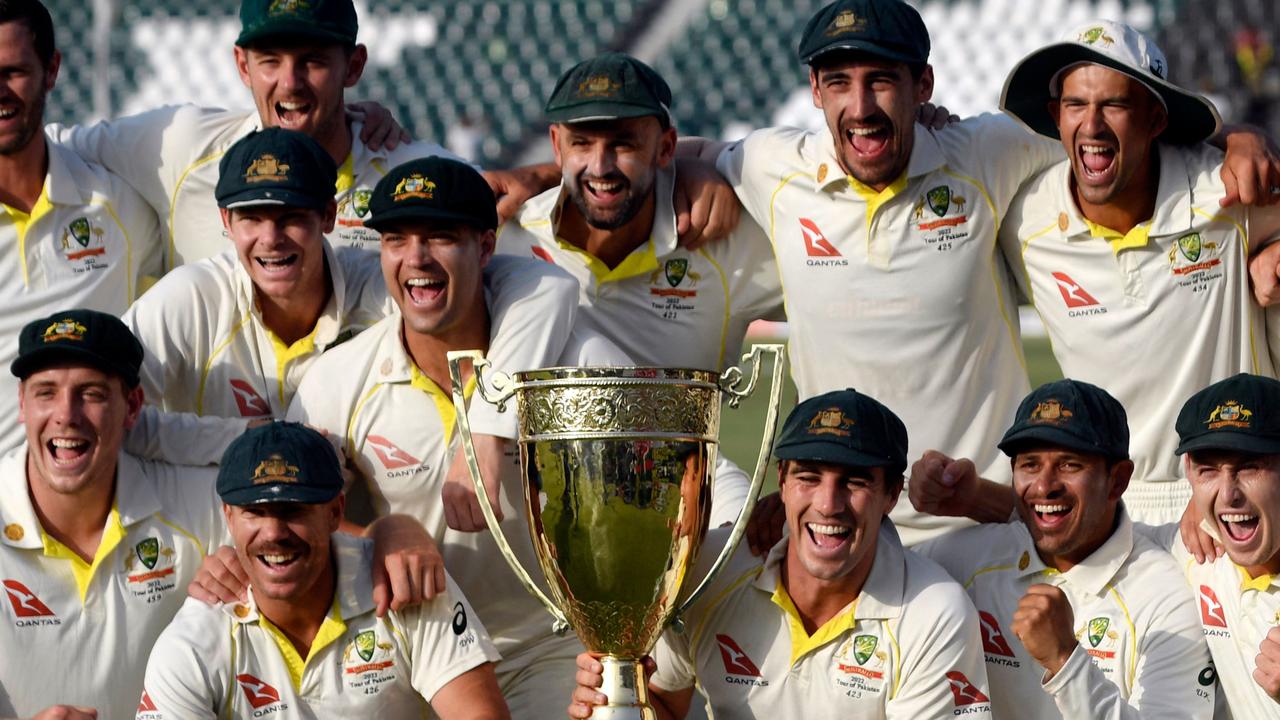 Australia claimed a famous victory against Pakistan on Friday, taking the three-Test series 1-0 with a 115-run win on the fifth day of the last match in Lahore.

Australia are in Pakistan for the first time since 1998, having previously refused to tour over security fears.

Jubilant crowds of Pakistani cricket lovers have flocked to stadiums in Rawalpindi, Karachi and Lahore throughout the series in full support of both Pakistan and Australia, undeterred by the presence of heavy security. Australian players jubilate and pose for photograph with trophy after winning the third Test and series against Pakistan. AP

Spin king Nathan Lyon finished with 5-83 — his 19th five wicket haul — and was ably supported by skipper Pat Cummins (3-23) as Pakistan — set a challenging target of 351 — were bowled out for 235 in the last session on the fifth and final day.

Opener Imam-ul-Haq with 70 and skipper Babar Azam on 55 defied the Australian attack but Pakistan lost their last five wickets for just 22 runs.

The first two Tests ended in draws, the latest after a bold declaration by Cummins on Thursday.

Befittingly, Cummins bowled Naseem Shah for one to wrap up Pakistan’s innings an hour after tea to spark celebrations among his teammates.

Pakistan were in with a chance of drawing the Test at lunch with the score on 136-2 with 57 overs left, but Lyon took advantage of a weary fifth day Gaddafi Stadium pitch which offered good spin.

Cummins and Lyon sent three of Pakistan’s middle-order batsmen back to the pavilion for the addition of only 25 runs during the second session, turning the series-deciding Test on its head.

Azam and Sajid Khan shared a 46-run stand for the sixth wicket to delay the inevitable as they cracked four boundaries off the second new ball taken at 191-5.

But Lyon dismissed Azam caught in the slip off a sharp turner to nearly seal the match before Starc dismissed Sajid for 21.

Earlier, Haq resisted the Australian attack during the morning session but Lyon ended his innings on 70 in the second over after lunch. Imam edged the ball onto his pads and the ball lobbed up into the hands of Marnus Labuschagne at silly point.

Haq, who batted for 276 minutes and hit five boundaries, reviewed the decision but the replay also ruled him out.

Cummins then trapped Fawad Alam (11) off a fuller delivery that evaded a defensive push by the left-hander.

Cummins doubled his wickets tally with another furious yorker that trapped wicketkeeper-batsman Mohammad Rizwan in front of his wickets for zero.

Pakistan lost Abdullah Shafique (27) and Azhar Ali (17) after resuming at 73 without loss in the morning.

Cameron Green provided Australia the much-needed early breakthrough when he forced an edge off Shafique in the fourth over of the day for wicketkeeper Alex Carey to take a simple catch.

Haq and Azhar took the score to 105 when spinner Lyon struck for the second breakthrough. Azhar missed a sweep and the ensuing thin edge was taken at slip by Steve Smith.

Umpire Ahsan Raza was forced to overturn the not-out decision on Australia’s review with television replays showing a faint edge.

The tourists will now play three one-day internationals on 29, 31 March and 2 April, and a Twenty20 international on 5 April — all in Lahore.