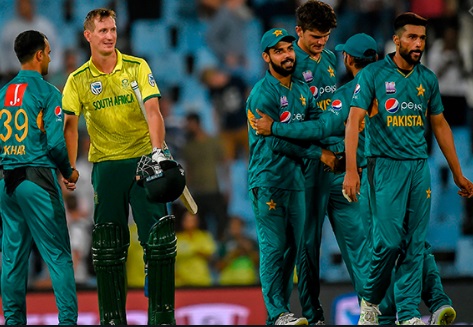 Wicketkeeper-batsman Mohammad Rizwan smashed a maiden T20 century with seven sixes as Pakistan beat South Africa by three runs in the first Twenty20 international on Thursday.. Rizwan”s unbeaten 104 off 64 balls anchored the home team to 169-6 after Heinrich Klaasen won the toss and elected to field. In the process, Rizwan became only the second Pakistani to score a hundred in all three formats. An inexperienced South Africa, without its frontline T20 regulars including skipper Quinton de Kock, put up a hard fight with Reeza Hendricks making 54 and Janneman Malan making 44 off 29 balls before being restricted at 166-6. Needing 19 off the last over, Bjorn Fortuin (17 not out) and Dwaine Pretorius (15 not out) brought down the target to 6 off the last ball but Faheem Ashraf conceded just two runs to give Pakistan a 1-0 lead in the three-match series.The Proteas were in a strong position early in the game before Usman Qadir’s spell of 2 for 21 turned things around in the field for Pakistan.

Man of the Match Mohammad Rizwan .