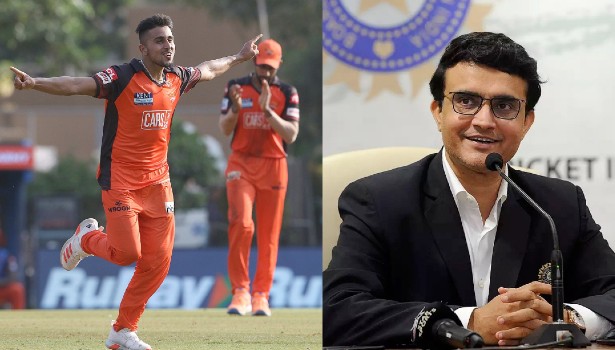 The Indian Premier League (IPL) is about to enter its business end and so far, there have been many memorable performances. Rajasthan Royals batter Jos Buttler has already registered three centuries while Lucknow Super Giants skipper KL Rahul has also shown good form with the bat. Kuldeep Yadav and Yuzvendra Chahal are the leading two wicket-takers in this ongoing season. However, Board of Control for Cricket in India (BCCI) President Sourav Ganguly has named a young pacer as the “outstanding face of the league so far.”

Ganguly has praised SunRisers Hyderabad pacer Umran Malik. The fast-bowler from Jammu and Kashmir can bowl consistently above 150kmph.

“Oh, it’s very interesting, I am watching [the IPL]. Any team can win and everyone is playing well. The two new teams – Gujrat Titans and Lucknow Super Giants – are doing well. Umran Malik’s bowling has been eye-catching. Umesh Yadav too has bowled well and so has Khalil Ahmed. I would say Umran Malik has been the outstanding face of the league so far,” .

In the ongoing season, Umran has taken 15 wickets so far with his best performance coming in the game against Gujarat Titans.

In the game against Gujarat Titans, Umran returned with figures of 5-25 and was adjudged as ‘Player Of the Match’ despite SunRisers Hyderabad coming on the wrong end of the result.

Earlier speaking about his pace in an interview with NDTV, Umran had said: “Speed comes naturally to me. This year I am trying to work on hitting the right areas. I always used to bowl fast. I just want to make Jammu and Kashmir proud and I want to make the country proud. I just want to perform well.”