‘Our turn to win’ says Hansen, as Barca head for CL final with Chelsea 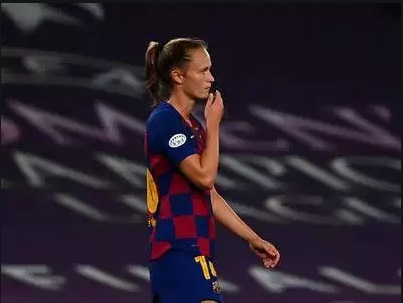 Barcelona winger Caroline Graham Hansen is putting aside the disappointment of previous Women’s Champions League finals to focus on Chelsea in Sunday’s decider in Gothenburg, where both clubs will be aiming to win the top club prize for the first time.

Having missed 2015’s final through injury, Hansen was on the losing side in the 2018 decider when her VfL Wolfsburg side was beaten 4-1 in extra time by Olympique Lyonnais. The following year many of her current teammates took part as Barcelona was beaten 4-1 as Lyon clinched the fourth of five consecutive titles.

“It’s never fun to lose matches, and in that moment it’s extra disappointing when one doesn’t contribute to the extent that one can because of injury, the body doesn’t work – the disappointment is bigger, the frustration,” the 26-year-old told Reuters.”It’s never fun to lose a final, so on Sunday I’m going to do all I can, because it’s our turn to win.”First capped for Norway at 16, Hansen was part of the team that lost the 2013 European Championship final to Germany, but her trophy cabinet still bulges thanks to two Norwegian league titles with Stabaek, three German league crowns and five cups with Wolfsburg, and two league titles and several cups with Barcelona.

The only thing missing is a Champions League crown. But despite previous disappointments, Hansen does not see Sunday’s final as a chance for revenge.

“I see it more as a possibility to win. What’s done is done, and now we’re in the final with a new team, a new opponent and a new time. What has already happened can’t be undone, and what happens on Sunday is all we can influence,” she said.

After the 2019 World Cup in France where Norway was knocked out at the quarter-final stage by England, Hansen joined a Barcelona side that won the 2020 title and dominated the Primera Division this season, winning all 26 of their games so far to defend their crown.

The Catalan side is now looking to complete the double while playing the kind of football that the club is famous for.

“We are a very good collective, good at holding on to the ball, great players technically with great game intelligence. I’d like to say that we play entertaining football, that’s what we’ve done this year – a lot of goals. It’s enjoyable to see the way we score goals and create chances,” Hansen explains.

For the second year in a row, the biggest game in club football will be played behind closed doors, but when asked about the lack of fans in the stands, Graham Hansen shrugs.

“We thought it might be possible to have many friends and family to come and watch. But it will be fantastic to play in a Champions League final,” she said.

“My feeling at the moment is that we’re good and we’re ready and we’re just looking forward to the final.”