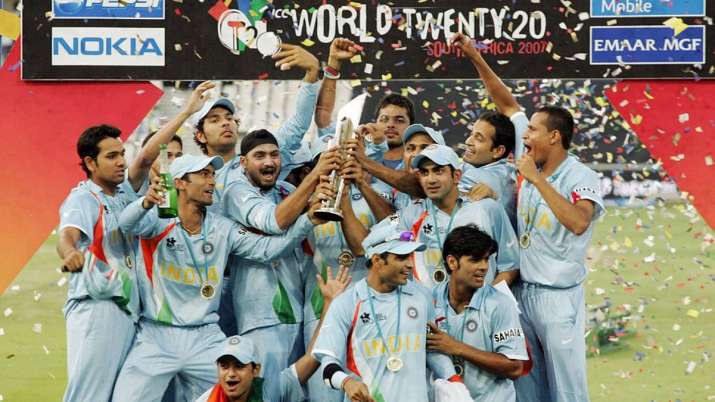 On September 24, 2007, Team India scripted a new era in the history of cricket. Exactly 14 years back on this day, India — led by a relatively inexperienced but confident captain MS Dhoni — won the inaugural edition of the ICC T20 World Cup. The Men in Blue defeated arch rivals Pakistan by five runs to lift the maiden T20 crown in front of a frenzied crowd at the Wanderers, in Johannesburg, South Africa.

Flashback to the T20 World Cup 2007, Misbah blistering innings with one wrong shot of scoop. How many of you have seen this nail biting final Live back in 2007? 💯pic.twitter.com/5ITMvieSgh

The 2007 World Twenty20 victory was also a significant one as it was the Men in Blue’s first major limited-overs’ trophy since the 1983 World Cup triumph. The world witnessed a remarkable achievement as the Asian rivals played out perhaps the best final ever seen in a major ICC tournament. India were relatively inexperienced as they were bereft of any domestic T20 set-up but went on to reach the semi-finals of the first T20 World cup. They beat Australia by 15 runs to set a date with Pakistan in the final.

Earlier on that day, Team India won the toss and opted to bat first. They soon lost opener Yusuf Pathan and third down Robin Uthappa within the first six overs. However, Gautam Gambhir’s crucial 54-ball-75 and Rohit Sharma’s late unbeaten burst (30 off 16 balls) helped their side to a total of 157. The world witnessed a remarkable achievement as the Asian rivals played out perhaps the best final ever seen in a major ICC tournament. (Image: Twitter/RP Singh)

Chasing what felt like a competitive total, Pakistan kept losing wickets at regular intervals. However, Misbah-ul-Haq, opening in the middle order, revived the contest by hitting three sixes off Harbhajan Singh’s balls and kept his side’s hopes alive until the last over.

Pakistan needed 13 runs off the final over with one wicket still in hand. Dhoni sprang a surprise by handing the ball to the inexperienced Joginder Sharma to get Haq dismissed. Haq sent Sharma’s second ball for a six and Pakistan were at the brink of glory. However, he misjudged the next ball and played the scoop, but it ended up in the hands of Sreesanth and India registered a memorable win by five runs. 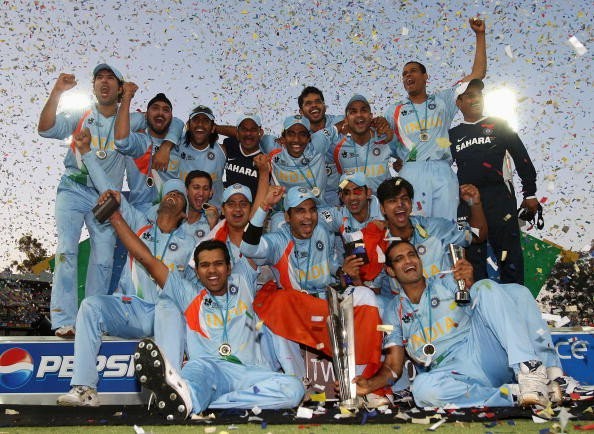 The young rookie Indian team clinched the maiden ICC T20 World Cup and the historic triumph is still fresh in the minds of players and cricket fans worldwide. (Image: Twitter/BCCI)

The young rookie Indian team clinched the maiden ICC T20 World Cup and the historic triumph is still fresh in the minds of players and cricket fans worldwide.