On This Day in 2007: Gaylestorm Hits Johannesburg as Chris Gayle Becomes First to Score Century in T20Is 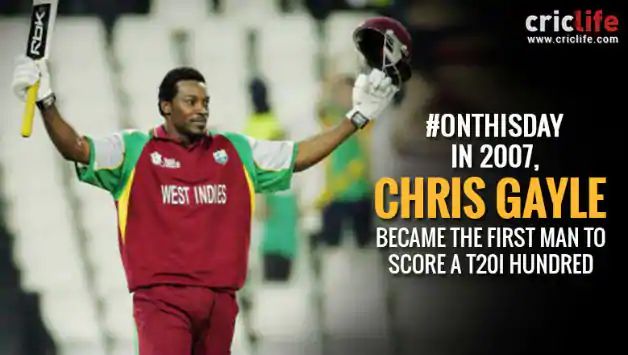 On this day, September 11 in 2007, in the first match of the inaugural ICC T20 World Cup tournament, a ‘Gaylestorm’ swept through Johannesburg. The first match was between West Indies and South Africa and Chris Gayle played one of his finest knocks in the format.

South Africa won the toss and opted to field against West Indies in the opening clash. With the likes of Shaun Pollock, Makhaya Ntini, Morkel brothers – Morne and Albie, Johan van der Wath included in their bowling attack, the hosts were stacked with star players. However, the hosts and thousands in attendance witnessed absolute carnage as opener Gayle wreaked havoc.

Gayle hammered a blistering ton as South Africa had no answer to tackle the ‘Universal Boss’. The first breakthrough for South Africa came when WI had already racked up 145 as Vernon Philander dismissed Devon Smith for 35.

Gayle smashed a whopping 117 in 57 deliveries which comprised of 7 fours and 10 sixes before Van der Wath removed him for 117.

After Gayle’s dismissal, the remaining West Indies batters continued to pile on the runs as they finished with a whopping 205/6.

South Africa bowler Pollock was taken for a ride as the veteran finished with 52/1 in four overs.

Chasing 206, South Africa were off to a bright start with captain Graeme Smith and Herschelle Gibbs opening for the hosts. While Gibbs was hammering away, Smith played a decent role before being removed by Ravi Rampaul for 28.

Supporting Gibbs, was a young AB de Villiers who didn’t make an impact in the tournament opener as he was removed for 16 by Fidel Edwards with the score reading 88/2 in 8.1 overs.

However, Gibbs and Justin Kemp stitched a strong partnership to lead South Africa to victory in the opening match, chasing 206 runs in 17.4 overs and winning by 8 wickets.