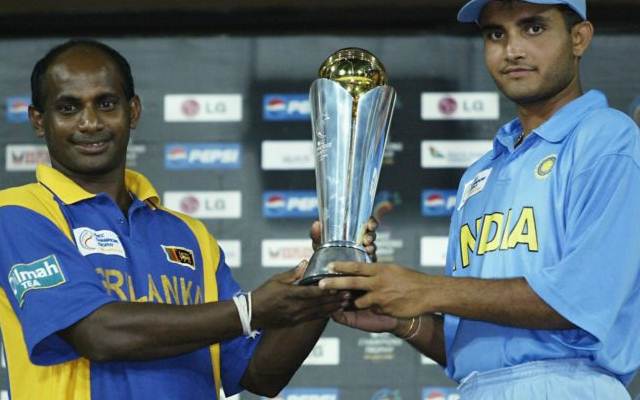 The fans of the Indian cricket team can never forget what transpired on September 30, 2002. It was on this day that even after 110.4 overs and 2 days of action, no result was possible in the final of the ICC Champions Trophy and as per the rules, India and Sri Lanka were declared joint champions.

The ICC Champions Trophy 2002 took place in Sri Lanka and as many as 12 teams took part in the tournament. The Indian team was in great form and led by Sourav Ganguly, the side beat South Africa in the semi-finals while Sri Lanka defeated Australia.

India took on hosts Sri Lanka in the final that was held on September 29. Sri Lanka batted first and scored 244 runs in the stipulated 50 overs at the Premadasa Stadium in Colombo. Captain Sanath Jayasuriya led the charge with 74 while Kumar Sangakkara chipped in with 54 runs.

For India, off-spinner Harbhajan Singh took 3 wickets for 27 runs. In response, India scored 14 runs in 2 overs without a wicket and soon after the second over, the rain intervened and the match had to be called off for the day.

However, as per the ICC rules, the final started again from scratch on September 30, the reserve day. Sri Lanka won the toss and decided to bat once again. This time Sanath Jayasuriya and Kumar Sangakkara were not able to replicate their performances. Mahela Jayawardene scored 74 and Russell Arnold scored 56 not out. For India, Zaheer Khan took 3 wickets for 44 runs.

In response, India were at 38 runs for one wicket in 8.4 overs when the game had to be stopped once again due to rain. Virender Sehwag remained unbeaten on 25 and Sachin Tendulkar scored 7 runs. In total, 110.4 overs were bowled across two days, and yet, the trophy had to be shared between India and Sri Lanka.