On This Day in 1996: Pakistan’s Shahid Afridi Scored 37-ball Century Against Sri Lanka 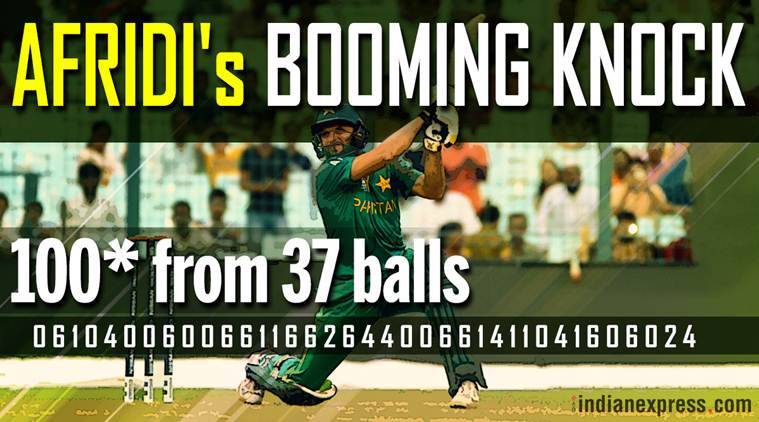 Former Pakistan skipper and flamboyant all-rounder Shahid Afridi was an enigmatic personality who gave a new dimension to the Pakistan cricket team. Afridi was hailed as one of the biggest crowd-pullers as he entertained the viewers with his eccentric batting and the ability to smash the ball all over the park, irrespective of the opposition he was playing against.

One of the brightest moments of Afridi’s career came in 1996 when he blasted the fastest-ever ODI century. Playing in only his second One Day International against Sri Lanka, the Pakistan all-rounder reached his hundred in just 37 deliveries. Afridi held the record for the fastest ODI century for over 17 years.

It was in 2014, that Corey Anderson broke the historic record by smashing a 36-ball hundred. As of now, South Africa’s AB de Villiers is at the top of the charts as in 2015 he hammered 100 runs in just 31 balls in an ODI game against West Indies.Coming back to Afridi, the Pakistan star steered the team to victory by 82 runs against Sri Lanka by playing the most memorable knock of his ODI career. The Men in Green were up against Sri Lanka in the league match of the KCA Centenary Tournament on October 4, 1996

Put to bat first, Pakistan lost their first wicket in the form of Saleem Elahi at a score of 60. What followed after that was a complete annihilation of the Sri Lanka bowlers. Walking to bat at number three, Afridi posted 102 runs in just 40 deliveries. His knock was laced with six boundaries and 11 maximums at a strike rate of 255. It was KSC de Silva who was successful in putting a break to the heroics of the batter.

Apart from Afridi, the opening batter Saeed Anwar was also terrific with the willow as he smashed 115 runs in 120 deliveries. The two batters together took the Pakistan team to a mammoth score of 371Chasing 372, Sri Lanka ended up with 289 runs. Aravinda de Silva was the highest run-scorer for his team as he scored 122 off 116. However, the team fell short of 82 runs as Waqar Younis picked a five-wicket haul. Afridi had contributed with the ball too as he had picked a lone wicket of Arjuna Ranatunga