On This Day in 1991: When Javagal Srinath’s 6/21 Guided India to Test Victory Against South Africa 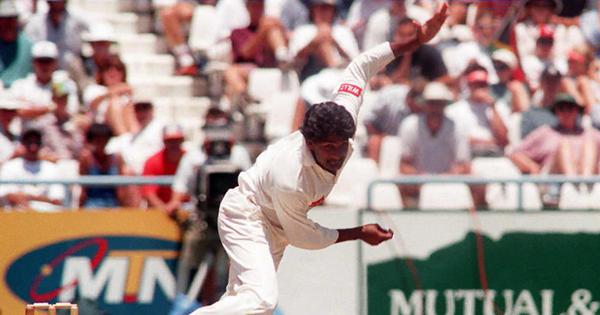 After staging a comeback to world cricket against India in 1991, South Africa once again returned to Indian shores after five years for a three-match Test series and a solitary ODI. The venue of the series opener was Ahmedabad’s Motera Stadium and by the time the Proteas returned to India, they had emerged as one of the leading fast-bowling units in the world. The home team was helmed by the legendary Sachin Tendulkar, while Hansie Cronje was the captain of the visiting team in that series.

Earlier in that match, the hosts elected to bat first upon winning the toss. Skipper Tendulkar and Mohammad Azharuddin top scored in the first innings before the team was bowled out for 223. Allan Donald returned with 4/37, while Pat Symcox and Fanie de Villiers chipped in with two wickets each.

India hit back, as they didn’t let the visitors settle in at the crease but managed to score 244 runs, a slender lead of 21 runs, before being bowled out. Daryll Cullinan (43), De Villiers (67) were top-scored for their team, while Sunil Joshi starred with the ball in the first innings for India, the spinner returned with 4/43. Javagal Srinath, Anil Kumble and Narendra Hirwani snared two apiece.

Donald again led the way with the ball (3/32) and with support from other South African bowlers, the visitors restricted India for just 190 in their second essay. The visitors just needed 170 to pull off their first Test victory on Indian soil.

But Srinath had other plans for the tourists, the Indian pacer produced a jaw-dropping spell to make the South African batters dance to his tunes. He provided the first breakthrough by trapping opener Andrew Hudson with a lbw, before dismissing Daryll Cullinan for a duck.

Kumble and Joshi picked wickets in between, but Srinath returned to get rid of Dave Richardson (7) and the dangerous Jonty Rhodes for a golden duck. It was the second instance in that innings that Srinath had taken two wickets in two deliveries.

The Karnataka speedster completed the formalities by cleaning up the rest of the South African line-up. He finished with magnificent figures of 6/21 from 11.5 overs not only helped in bowling the visitors out for a paltry 105, but also handed a famous 64-run victory on Day 4 itself.

Hansie Cronje and Co fought back to level the series in Kolkata, but the home team defeated them by 280 runs in Kanpur to make it 2-1.