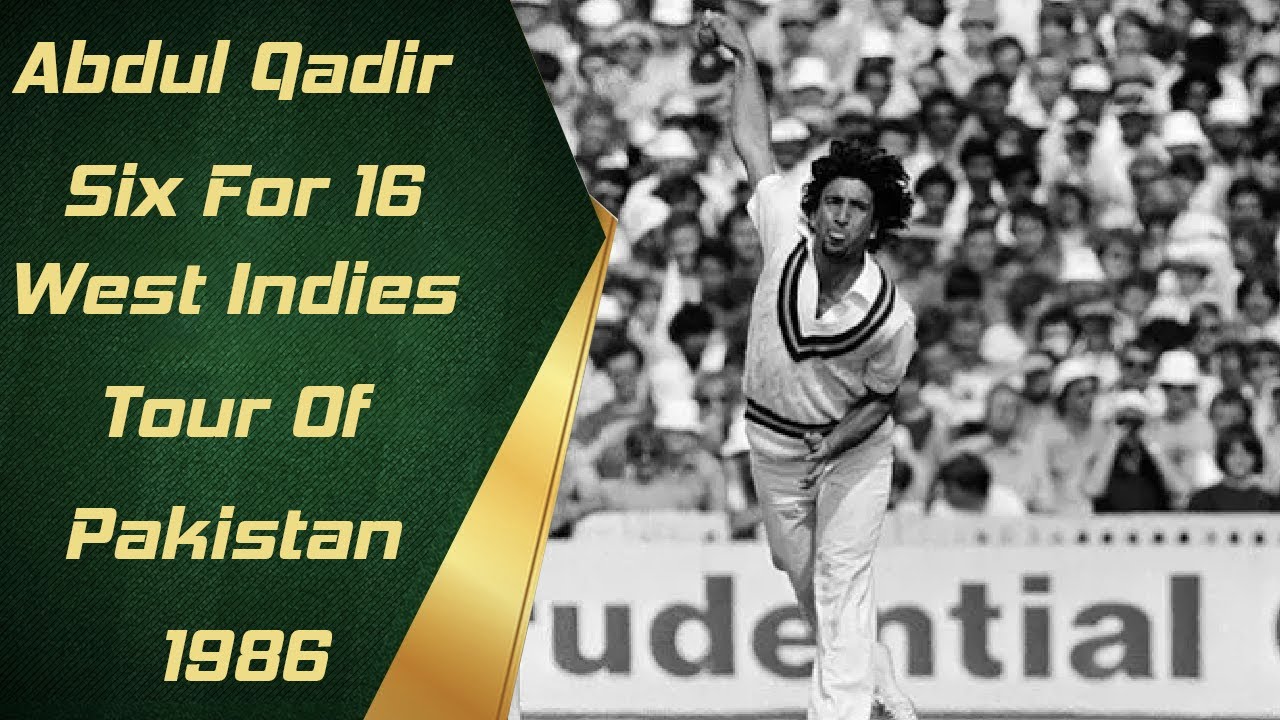 On this day, October 27, 1986, Abdul Qadir claimed six wickets each as Pakistan were able to bowl out the mighty West Indies for 53 in the second innings and win the first Test by 186 runs. Wasim Akram claimed 6/91 in the first innings, whereas Qadir claimed 6/16 in the second innings, ripping apart the Windies line-up that included many greats at the time. West Indies travelled to Pakistan to play a three-match Test series and five-match ODI series. It was in the first Test in Faisalabad where the Imran Khan-led Pakistan side demolished West Indies.

Imran won the toss and elected to bat in the first Test, a gutsy move given the likes of Courtney Walsh, Malcolm Marshall and Patrick Paterson in the attacking line-up. Opener Mohsin Khan was the first to depart after being trapped by Marshall for an LBW. In the very next delivery, Marshall trapped Ramiz Raja who departed for a duck. The hosts were reeling at 19/3 after Patterson removed Javed Miandad for 1. However, Saleem Malik (21) and skipper Imran Khan (61) stitched a solid partnership before Pakistan were bowled out for 159 in 38.5 overs as Tony Gray claimed 4/39 and Marshall registered figures of 3/48.

The tourists were able to play confidently before an unseen collapse fell through. Desmond Haynes (40), Richie Richardson (54), Larry Gomes (33), Roger Harper (28) and skipper Vivian Richards (33) were unable to score as the ‘King of Swing’ Akram weaved his magic and claimed figures of 6/91, helping Pakistan restrict the tourists to 248.

The tourists were able to play confidently before an unseen collapse fell through. Desmond Haynes (40), Richie Richardson (54), Larry Gomes (33), Roger Harper (28) and skipper Vivian Richards (33) were unable to score as the ‘King of Swing’ Akram weaved his magic and claimed figures of 6/91, helping Pakistan restrict the tourists to 248.

The hosts were able to retaliate despite Windies taking an 89-run lead. Mohsin Khan defended well but his fellow opener Mudassas Nazar was removed early for 2 by Marshall. Ramiz was once again not impactful as the No. 3 batter departed for 13, with the score reading 19/2. But Mohsin along with Saleem Yousif stitched a 94-run partnership before the opener was removed by Walsh. Saleem hung on and scored a gritty 61 before departing. Qasim Umar (48) and Miandad (30) added the much-needed runs. At 258/8, the hosts were in deep trouble, but Akram was able to stand up to the opposition and scored a heroic half-century before departing for 61. Akram’s contribution helped Pakistan post 328 on the board.

Chasing 240, West Indies believed they could cover the spread as they had time on their hands, however, Qadir had other ideas. West Indies were hit as Imran struck early, removing Haynes for a duck and Greenidge for 12. Qadir entered the frame and removed Richardson early before the swashbuckler could get going. Larry Gomes immediately followed, being bowled for 2 by Qadir.

The biggest shocker for the tourists arrived when Qadir caught captain Richards for a duck with the score reading 20/5. Qadir and Imran ripped the Windies line-up and bowled out the visitors for a paltry 53, winning the match by a solid 186 runs. Qadir registered figures of 6/16 and Imran claimed 4/30