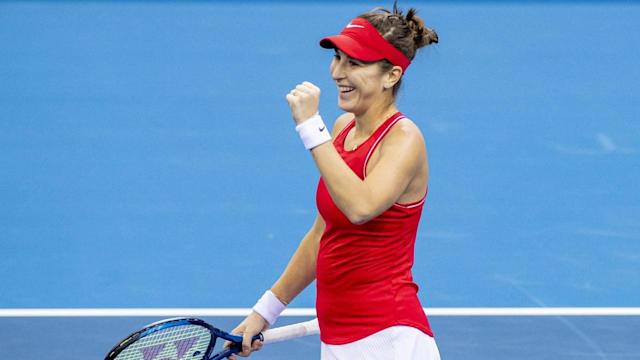 Sydney: Tokyo Olympics gold medallist Belinda Bencic said Tuesday she felt “a little bit wobbly” in her first match after Covid, warming up for the Australian Open with a low-key win.

The 24-year-old Swiss cruised into the second round of the Sydney Tennis Classic with a 6-3, 6-2 victory over Brazilian qualifier Beatriz Haddad Maia.

But Bencic, who contracted the virus in mid-December after competing at an Abu Dhabi exhibition, admitted she had not been at her best, with the first Grand Slam of the year starting on Monday.

“I was struggling a little bit, getting to practice after Covid because the pulse was getting up and the fatigue was still there,” said Bencic, a former world number four but now ranked 23rd.

“I think I still have room to feel better and my fitness has to get better.

“I still feel a little bit wobbly and so I think there is still potential, but I’m happy that I can play this tournament.”

She will now take on Oceane Dodin of France in the next round.

World number 20 Elise Mertens also moved through the first round with a comfortable 6-2, 7-6 (7/5) win over France’s Fiona Ferro.

The Belgian will take on Daria Kasatkina of Russia in the second round.

In the men’s draw, sixth seed Dusan Lajovic of Serbia was too strong for Spaniard Alejandro Davidovich Fokina, winning 7-6 (7/5), 6-4.