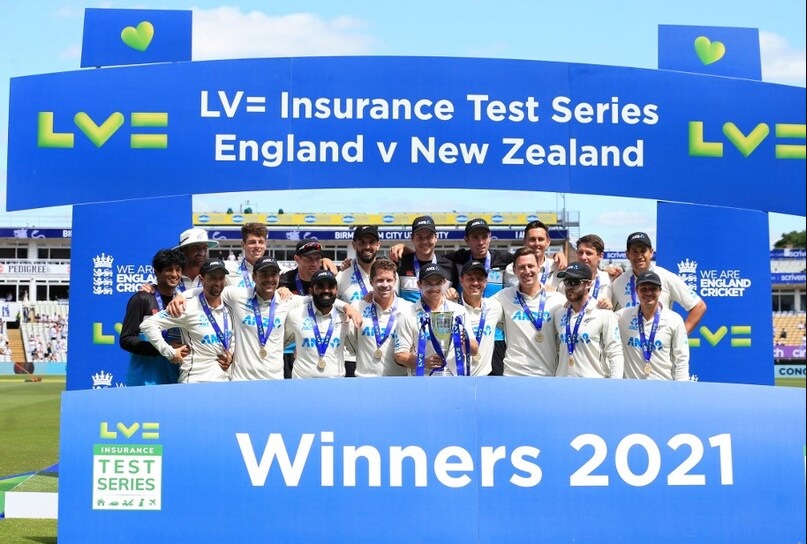 New Zealand overpowered England by eight wickets in the second Test at Edgbaston on Sunday as they sealed a 1-0 series win with more than a day to spare. Set a target of just 38 after England tailender Olly Stone was out to the very first ball of the fourth day, the Blackcaps finished on 41-2. Stand-in captain Tom Latham, leading the team in place of the injured Kane Williamson, hit the winning boundary to be 23 not out after the first Test of a two-match series at Lord’s ended in a draw last week.

Victory gave New Zealand just a third win in 18 Test series in England and a first this century after their 1986 and 1999 triumphs.By contrast, this was England’s first series loss at home since a 2014 defeat by Sri Lanka.

England resumed on the brink of defeat at 122-9 in their second innings, a lead of just 37 runs, after a top-order collapse that had seen them slump to 76-7.

Stone then fell for his overnight 15 when he edged left-arm quick Trent Boult and was caught behind, with James Anderson — in his England record 162nd Test — unbeaten on nought.

But the real damage had been done on Saturday when England’s top-order failed in an innings where fast bowler Mark Wood’s 29 was the top score.

Matt Henry, one of an extraordinary six changes to the New Zealand side that played at Lord’s, took the first three wickets to fall in a return of 3-36, with Neil Wagner following up with 3-18.

Such is the Blackcaps’ strength in depth, however, that either bowler could be replaced by the rested Tim Southee when New Zealand face India in next week’s inaugural World Test Championship final at Southampton.