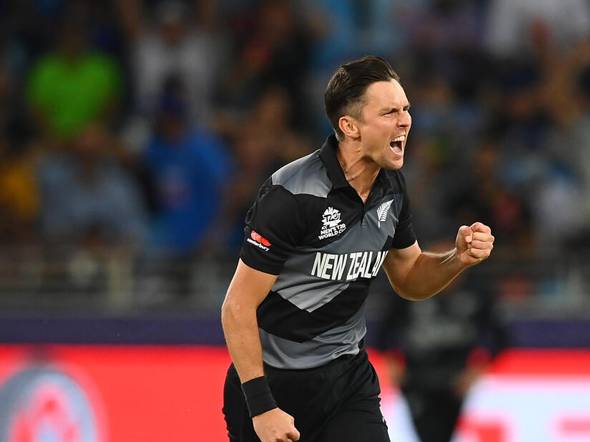 Black Caps pace spearhead Trent Boult and White Ferns skipper Sophie Devine won the ‘T20 International Player of the Year’ for their sensational run in the shortest format of the game at the New Zealand Cricket Awards.

The awards are being delivered virtually over three days.

Boult was awarded for his splendid run at the T20 World Cup in UAE lst here where New Zealand reached the final.

The 32-year old had taken 13 wickets in the tournament and played a crucial role in taking his side to the finals.

Boult defeated Tim Southee, Devon Conway, Daryl Mitchell and Ish Sodhi — who also played vital roles in the Black Caps’ run to the final before they lost to Australia — to take home the award.

“It means a lot. T20 is a format I really enjoy and one I’m constantly trying to adapt my game to in order to become a better bowler. It’s something very special to win this award and I feel really grateful to receive it,” Boult, who is currently in India for the ongoing Indian Premier League (IPL) 2022, said.

Devine, on the other hand, bagged her her second International Women’s T20 Player of the Year award in two years.

The fan moment of the summer went to the retired Ross Taylor for his final wicket in his last Test against Bangladesh in Christchurch.

Melie Kerr and Michael Bracewell were named the respective Super Smash Players of the Year following their efforts for Wellington.

Day two of the awards on Wednesday will see the first-class and domestic batting and bowling cups handed out along with the men’s and women’s ODI Players of the Year, and the Umpire of the Year award.

Thursday’s final day will see the presentation of the men’s and women’s Domestic Players of the Year, the Test Player of the Year, the Bert Sutcliffe Medal for outstanding services to cricket, and the supreme playing award – the Sir Richard Hadlee Medal.